No significant amount of rain has fallen on the Superior National Forest and none of the fires on the forest have been even partially contained. Fire fighting resources are inadequate for the current fires and more fires continue to start. This along with the lack of significant rainfall in the forecast prompted the USFS to extend the closure of the Boundary Waters Canoe Area Wilderness until at least September 3rd. 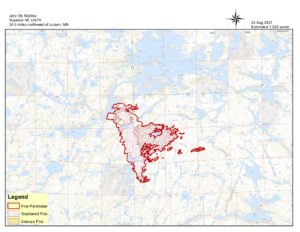 It’s a bummer for sure. People have canoe trips planned that have to be cancelled, folks are being evacuated from their cabins and homes and there’s smoke in the air. Fire fighters are exhausted and people’s nerves are frayed. Business owners are wondering how they will make it through the winter without the income they were expecting during the last two weeks of August and potentially into September.

It isn’t all gloom and doom though. No lives have been lost, there have been no significant injuries and damage to private property has so far been relatively little. With a little help from Mother Nature we’ll get a significant amount of rainfall, very little wind and the firefighters will be able to contain the current fires before they do serious harm. We’ll hope for the best and prepare for the worst.

The Gabi Fire is located southwest of Seagull Lake near Gabimichigami Lake and north of the John Ek Fire in the BWCAW.

The Petit Fire is just north of Crescent Lake and is also entirely inside the BWCA.