Home › BWCA › Pre-evacuation of the end of the Gunflint Trail

Pre-evacuation of the end of the Gunflint Trail

Last night the powers that be ordered a pre-evacuation for the end of the Gunflint Trail. What does this mean? The Sheriff’s Department and the GTVFD went door to door to inform people to gather their valuables, medications and pets so they were prepared in the event of a real evacuation.

The drought like conditions on the Superior National Forest aren’t like any thing that has been seen before. Fire behavior itself is unpredictable and when the wind suddenly shifts or humidity drops below a certain point things can happen fast. We witnessed how quickly fire can move during both the Pagami and Ham Lake Fire. While the John Ek Fire is quite a distance from us it is still too close for comfort. That fire could explode and reach the end of the Gunflint Trail within hours if all of the conditions for intense fire activity were met. It could also lay down and not grow if we get rain, calm days and cooler temperatures. 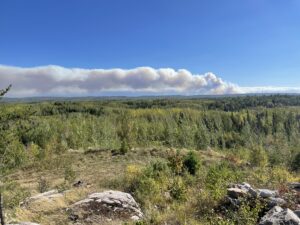 The phrase “lack of resources” has been used to discuss the current fire situation. There are resources in Minnesota capable of fighting fire but those have been focused on the Greenwood Fire near Isabella, MN.  This means the John Ek Fire is basically being left alone without fire supression efforts, or at least, not any I am aware of.  I’m not sure if any water has been dropped on the John Ek Fire but I know there aren’t any ground crews working on it.

Should there be fire suppression activity on the John Ek Fire? Is it more important than the Whelp or Greenwood Fire? Are there more resources out West that should come back to Minnesota to ensure the safety of the folks on the Gunflint Trail? I’m trying to figure that out. In the meantime, please do a little rain dance.