Fishing for Northern Pike in the Boundary Waters 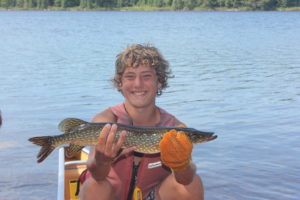 I love to paddle around the perimeter of small lakes both inside and outside of the Boundary Waters Canoe Area. While there are some people who will do this willingly my son usually wouldn’t do it with me unless we were trolling a line behind us. It isn’t the fastest way to tour the shoreline since you inevitably get snagged on logs, rocks and weeds but it is pretty fun.

How do you fish for Northern Pike? It’s a funny question since I don’t normally go out fishing just for Northern Pike but we usually end up catching one or two in the process. If you’re looking for an excuse to troll around a lake or want to catch a Northern Pike then the shoreline is usually a good place to start. They love weed beds, logs in the water, rocky points and any other type of structure in two to fifteen or so feet of water.  They hang out waiting for other small fish and then attack seemingly out of nowhere.

We primarily troll with flashy spoons or other lures shaped and painted to look like prey.  Sometimes we cast into the weed beds or onto points and then it’s nice to have a heavier lure on. You can reel and troll pretty fast as Northerns are quite speedy. You always want to have a steel leader tied to your lure or the pike will bite through the line. You can use a heavier than 8 pound test line if you know you are fishing primarily for northern pike and it’s a good idea to have a net along in case you catch one you want to keep. If I don’t want to keep the Northern I usually just reel it beside the canoe and use my needle nose to remove the hooks while the fish is still in the water. I’m not a particular fan of fish slime or cutting my hands on gills or teeth so if I do bring a Northern into the canoe I usually wear those fish gloves or use a clamper. Be sure to wet your hands prior to touching the fish if you are releasing it as Northern Pike have a protective slime coating. 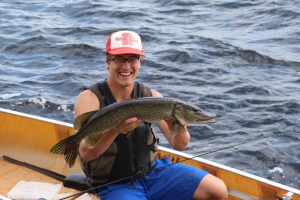 With Northern Pike generally the bigger the lure the bigger the fish you will catch. That is something I just haven’t gotten used to. If I spend $15-$30 on a lure the last thing I want to do is leave it on a log beneath the water’s surface. I stick to my inexpensive spoons knowing I will most likely lose one or three along the way.

We love to eat Northern Pike as long as whoever cleans the fish knows how to remove the Y Bone.