Communication at the end of the Gunflint Trail

The last one makes me cringe because like it or not we’re going to have cell service on the Gunflint Trail. Coming this summer a tower will be built next to Gunflint Lake near where there is  an existing tower. It will “tower” above the current tower and will be seen from parts of the Boundary Waters Canoe Area Wilderness. The Cook County Commissioners voted to approve a tower to improve communications for emergency responders. Long story short everyone will be able to use their cell phones on the Gunflint Trail and in the Eastern side of the BWCAW.

The real point of this blog is to talk about CB Radios. For a long time these were the only method of communication with neighbors surrounding Voyageur Canoe Outfitters. Folks with cabins on Gull Lake and on the other side of the Seagull River didn’t have telephones and neither did our neighbors on the Canadian side of Saganaga Lake. When a person had something “important” to say to someone it often meant waiting until the morning greetings were over. It was kind of like the night time scene from the Waltons television show, people had to check-in with each other upon rising for the day.

For the privacy of particular people I won’t use real CB handles here, even though many of the folks on the CB list shared below are no longer living. This isn’t meant to insult or offend anyone either, it’s just how we talk up on Sag.

“White snake to Bon Jovi  you on da air?”

“We got ourselves a beautiful mornin out der dontchaknow, over.”

“Whatch you got going on for de day, over?”

“Well, I’m sitting on da porch, listening to da loons, enjoying my cup of coffee right now. I might go see if I can catch dinner a little later, over.”

“Oh, that sounds wonderful. Isn’t it sumpthin that sun sparkling on da water dis mornin, over?”

“You betcha it is. It reminds me of a time…”

As soon as White Snake and Bon Jovi were finished conversing Madonna and Cyndi Lauper would go through pretty much the same dialogue. Next Def Leppard would call AC/DC and so on and so forth throughout the morning. There would be an afternoon lull when folks were outside fishing or doing “what not” and then the evening greetings would commence.

“Kiss to the Stones, you got your ears on?”

“Sure do Kiss, howyadoin, over?”

“Wasn’t it a beautiful day out dere, over?”

“I was gonna get me some wood chopped up but dat humidity darn near killed me so I decided to cool of in da boat, over.”

“Oh, yeah, dat humidity was sumping else wasn’t it? Didya catch any fish out dere?”

“Nah, I saw Def Leppard out dere and he had a boat load a eyes but he wouldn’t tell me nuthing bout where he got em, over”

“Sure is, whatchyou and de wife doing dis evening, over?”

“Just sitting on da deck enjoying us a couple cocktails before suppa and da bugs carry us away, over.”

“Oh yea, just got me one poured and gonna do da same now, over.”

“Well, you have yourself a good night now, over.”

Oh how I miss the days of listening to those folks talk. It was pretty much the same thing every day but the familiarity of their voices and their appreciation for the simple things in life had a soothing effect on the soul. It kept everyone in the community knitted together. Did we all need to know what White Snake had for breakfast? Of course not, but knowing it created a sense of intimacy with that person whether or not you were the one talking on the other end. Our lives were all intertwined and so much richer for it. Some people still use the CB to communicate on Saganaga but it sure isn’t as many as before and with a cell phone tower coming I wonder if it will cease altogether?

I think about Covid and isolation and wonder about communication. What if we had CB communication with everyone in our neighborhoods? What if you heard your neighbor’s voice every day or knew what they had for breakast? Would we have felt as isolated during Covid? Would it make a difference how you treat your neighbors? I don’t know, just a thought.  Wood Duck clear and 10/10. 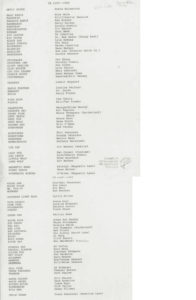