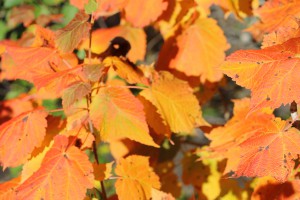 It’s beginning to look more like fall every day.  Today was a gorgeous day with brilliant sunshine and the temperature up in the 70’s on the Gunflint Trail. The forecast calls for more temperatures in the 70’s for the rest of the week. I wish I were out camping in the BWCA but at least I’ve been able to get out and do a little hiking.

Today a friend and I hiked the Devil’s Kettle Trail in Judge C. Magney State Park. It’s a short one mile hike along the Brule River to a beautiful waterfall.  Half of the river spills into a pool below the falls and where the other half goes nobody knows. Read the story below to learn more about it. 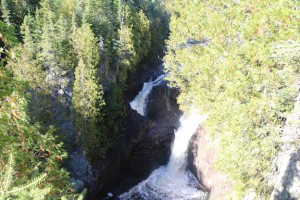 If you’ve ever worried that we’ve solved all the mysteries of nature, fear not. Minnesota’s Devil’s Kettle Falls has been puzzling hikers and geologists for generations. At the falls, along Lake Superior’s north shore, a river forks at a rock outcropping. While one side tumbles down a two-step stone embankment and continues on like a normal waterfall, the other side vanishes into a deep hole and disappears — apparently forever.

A few miles south of the U.S.-Canadian border, the Brule River flows through Minnesota’s Judge C. R. Magney State Park, where it drops 800 feet in an 8-mile span, creating several waterfalls. A mile and a half north of the shore of Lake Superior, a thick knuckle of rhyolite rock juts out, dividing the river dramatically at the crest of the falls. To the east, a traditional waterfall carves a downward path, but to the west, a geological conundrum awaits visitors. A giant pothole, the Devil’s Kettle, swallows half of the Brule and no one has any idea where it goes. The consensus is that there must be an exit point somewhere beneath Lake Superior, but over the years, researchers and the curious have poured dye, pingpong balls, even logs into the kettle, then watched the lake for any sign of them. So far, none has ever been found.
And this baffling situation only gets weirder when geologists start explaining Devil’s Kettle. Consider, for instance, the sheer quantity of water pouring into the kettle every minute of every day. While the notion of some kind of broad, underground river is an exciting device in movies, the reality is that those sorts of deep caves are rare, and only form in soft rock types like limestone. Northern Minnesota, as geologists will tell you, is built of stronger stuff.
In harder rocks like the local rhyolite and basalts, tectonic action can sometimes crush underground rock layers, creating a much more permeable environment for water. Unfortunately, there’s no evidence of a fault line in the area, and even if there were, it’s unlikely that the kettle could continue draining the Brule indefinitely. Storms and erosion send debris, sometimes as large as boulders and trees, over the falls and into the kettle — if the drainage route was, in effect, an underground gravel bed, at some point it would clog.
Another idea is that millions of years ago, a hollow lava tube may have formed beneath the falls, in the subsurface layer of basalt. Over time, the theory posits, the falling water eroded the rhyolite surface and punched straight down into the ancient lava tube, providing wide open access to the floor of Lake Superior. Again, there are problems with this theory, primarily that the local basalt is a type known as flood basalt, which spreads out as a flat sheet when ancient lava bubbled up from fissures in the ground. Lava tubes form in basalt flowing down the slopes of volcanoes, and even if the geology in northern Minnesota had somehow created an exception to that rule, no lava tubes have ever been found in any of the hundreds of exposed basalt beds in the area.
So where does the water go? So far, nobody knows — but not for lack of trying. Scientists and hikers will keep tossing things into the Devil’s Kettle and watching Lake Superior for any sign of their trinkets, but maybe there are other explanations. If you happen to be traveling, say, somewhere in Eurasia and stumble across a geyser that’s surrounded by pingpong balls, logs, and even a car that locals are reported to have pushed in one night years ago, you might want to call a geologist in Minnesota. You may just have solved the mystery of Devil’s Kettle Falls. 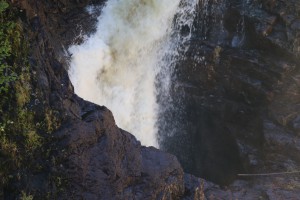