When we finally heard voices we were ecstatic and relieved. We couldn’t hear what they were saying very well over the loud sound of the waterfall but we were able to communicate to them that we needed to be rescued. We let them know it wasn’t an emergency and we were all injury free. We asked them to call 911 and have Search and Rescue dispatched. 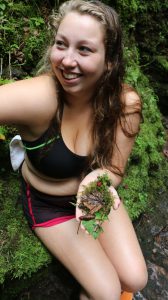 Our next meal had we not been rescued

While screaming and scanning the canyon walls for places I might be able to scale I never once thought we would have to spend the night there. Maybe it was wishful thinking but in any case I wasn’t prepared to do so. Normally I have my backpack that I take every time I go camping, paddling or hiking. Inside of it I have an emergency blanket, rain poncho, rope, duct tape, fire starter, bug spray, sunscreen, water treatment pills, toilet paper, signaling device, compass, lip balm, small first aid kit, bandana, whistle and more. However, on this particular day I had held that backpack in my hands and then at the last minute decided to grab a larger one so I had room for the 6-pack of beer and I left my companion backpack at home.

We were wet and a bit chilled because the sunshine doesn’t reach into the canyon. That didn’t affect the spirits of Abby or Chloe. They had a great attitude, remained calm and even made a little home for us with a bedroom, kitchen, bath tub and bathroom. They captured hilarious footage of themselves with my camera and made our time stranded seem like we were just hanging out for the day. 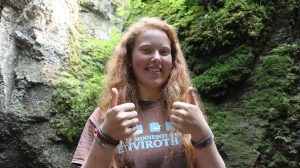 Two Thumbs Up Even BEFORE rescuers heard us!

Confident in our guardian angels we celebrated our good fortune and settled in to wait for the Search and Rescue to arrive. We ended up waiting longer than we thought we would have to because our angels met up with Mike on the trail. They relayed the information we had given them and he wanted to know the exact location we were at and our situation before calling for help.

Mike isn’t one to ask for help and there are very few situations he can’t figure out a solution for on his own. He wasn’t about to have the Search and Rescue team come out for something he could accomplish on his own. They led him to where we were and he yelled down to us. Again, we couldn’t hear what he was saying over the sound of the falls. We confirmed we were all physically fine but we couldn’t make it down the falls. I tried to explain that he should walk up the river to talk with us and maybe help us down himself. Unfortunately I didn’t get the message across but he did make the call to Search and Rescue. 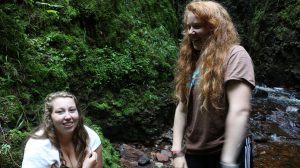 I don’t know the exact timeline of events. But the angels heard us around 4:00pm and Mike probably talked to us around 4:45pm. The Search and Rescue team most likely arrived around 5:30pm because Chloe and Abby were on the other side of the waterfall by 6:30pm. It did take the rescuers awhile to determine the best method of getting us down safely. While they probably could have helped us down on their left side of the falls, possibly injury free without ropes, they chose the safe bet and set up some ropes to use. 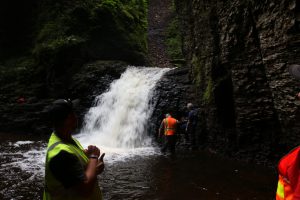 They threw us a rope and I secured it to a large rock in the river. I held on to the rope as a rescuer climbed up the falls. He then made a harness out of straps and got Chloe into it and ready to make her way down the falls. Using a knot instead of a caribiner she could control the speed of her descent and if she let go the rope would catch her so she wouldn’t fall. Once Chloe was safely down it was Abby’s turn. For her they used a belt instead of the strap caribiner and with a little assistance she too was over the falls. Last but not least it was my turn. Part of me just wanted to remain there to avoid embarrassment but I too made it down safely.

After the rescuers made sure we were physically able to walk on our own we hiked down the river until it met up with the hiking trail. There waiting for us were a number of people including a couple of EMT’s, a couple of Sheriff Deputies,  a couple Volunteer Fire Department members and Mike. He was relieved to see we were indeed fine. 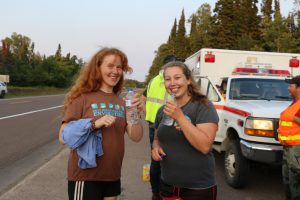 We hiked the trail out to the bridge on the highway where the parking area is. There awaiting our arrival were two ambulances, a dozen or so concerned responders and Chloe’s Mom. Evidently she was very worried about Chloe and very happy to see she was OK.

I was very grateful for the help and concern of all of the people involved in the rescue. They did an amazing job and we were all appreciative of their help. We live in a wonderful and caring community and since it’s such a small community I knew most of the rescuers. What I felt besides blessed was embarrassed that I had to be rescued.

I’ll save that part of the story for another day.