Here’s the latest from the Minnesota DNR- 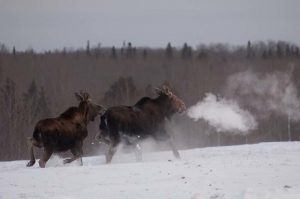 Minnesota’s moose population shows signs of stability when comparing this year’s population estimate of 3,710 northeastern Minnesota moose with estimates since 2012, according to the Department of Natural Resources.

“At this point, results do not indicate that moose are recovering in northeastern Minnesota,” said Glenn DelGiudice, DNR moose project leader. “While it is encouraging to see that the decline in the population since 2012 has not been as steep, the apparent stability does not allow us to forecast the direction of the population’s trajectory into the future.”

The 2017 aerial moose survey estimate of 3,710 moose in the northeastern part of the state is statistically unchanged from last year’s estimate of 4,020. There is inherent uncertainty associated with survey estimates, because researchers will never see and count all of the animals being surveyed across the vast landscape. Statistically, the DNR is 90 percent certain that the population estimate is between 3,010 and 4,710 moose.

Research by the DNR continues to examine the complex potential causes of a moose population decline that started about a decade ago. The research also suggests the recent signs of stability could have resulted from higher calf survival. Much remains unknown. What is known: Factors including infections, parasites and other health issues are killing moose and predisposing them to being preyed on by wolves.

Studies have shown that adult moose survival has the greatest long-term impact on changes in the size of moose populations. The DNR’s moose mortality research project shows that survival of adult moose has remained between 85 and 88 percent from 2014 to 2016, a bit higher than the average of 81 percent during 2002 to 2008, and 81 percent in 2013. Wolves do prey on healthy adult moose and calves, although research data have indicated modestly higher calf survival in the past couple of years compared to 2013, which may be contributing to the population’s recent apparent stability.

Annual aerial moose surveys have been conducted each year since 1960 in the northeast. Adjustments were made in 2005 to make the survey more accurate and annual results more comparable.