Isle Royale to welcome healthy wolves, researchers happy, moose not so much

This might be a better headline than the one Popular Science used to describe what is happening on Isle Royale with wolves. Their headline claims,  “A pack of wolves is about to save this national park.” A little bit dramatic for my liking and not very accurate.

A decision has been made to bring wolves to the island because the two remaining wolves are father and daughter/sister. Inbreeding in the wolf pack and the lack of an ice bridge for more wolves to make their way out to the island has left researchers who have studied the wolf/moose population on Isle Royale scratching their heads. “How can we continue our over 60 years of research without wolves on the island? Rather than let nature take its course as the National Park Service most often does, they have decided to intervene and bring wolves to Isle Royale so the moose don’t “kill” the island.

You may be sensing sarcasm and you would be right. I am being sarcastic. Do I think wolves should be brought to Isle Royale?  It doesn’t really matter but what matters to me is the explanations as to why they are being brought there. I understand. There are researchers and colleges all over that depend up 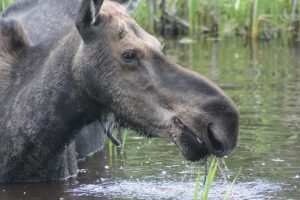 on the moose/wolf relationship on Isle Royale as part of their livelihood or curriculum. I think that balance is weighing far more heavily than the number of moose on the island. If there are too many moose on the island then what? They are afraid of the moose dying of starvation. There might be a big increase in the moose numbers but if the island can’t sustain it then they will die. Wouldn’t it be just as interesting to see what happens naturally if left alone?