Sue Prom Posted on September 2, 2017 Posted in hiking No Comments Tagged with kadunce

It was a beautiful day on the river with the sun shining and temperature warm. The water felt warm on our feet and we gladly waded in water up to our waists to get from one falls to another. It had been a couple of years since I had last hiked the river and I couldn’t remember the difficulty or order of the falls.

The first waterfalls were super easy to get up. The second waterfalls were the ones I was apprehensive about when I hiked with Josh and his friend. I wanted to take advantage of the photo opportunity there and by the time I was ready to check the falls out Chloe was at the top. I looked at the falls and could tell there was considerably more water going over than there had been when I was there last.  I assisted Abby up the rocks and then attempted to get up myself. I made it partway before sliding back down the rocks on my left side and then landing on sharp rocks in the river.

I decided to check out the right side of the waterfall to see if it would be easier. While it was a little drier it wasn’t easier and it took me awhile to build up enough courage to go for it but I made it to the top. A bit exhausted and shaky I was happy to have that behind us as we continued on our adventure. 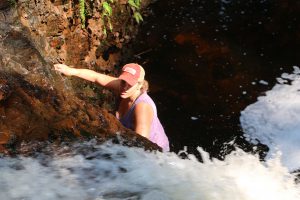 We enjoyed the gorgeous scenery of the canyons and moving water. We went up a few more rapids and at one set of falls Abby slipped on the rocks and landed on her side. I could tell it hurt her but she’s tough and there weren’t any tears so we kept going.

We reached the last falls and I remembered this one as being a little tricky to descend. A group had been climbing there and using ropes for assistance. It was much drier then so it didn’t stick in my mind as being particularly difficult. Chloe led the charge and made it within a few feet of the top but then didn’t think she could make it the rest of the way. There wasn’t a good dry place to climb and there weren’t hand holds. I went up to where she was and spent alot of time pondering what to do.

I knew it would be risky to attempt to ascend the remaining bit of the waterfall. Chloe was apprehensive at the top and Abby was still at the bottom of the falls. I didn’t feel comfortable forcing Chloe to continue up the falls but I also didn’t want to have to descend the waterfall I had trouble with. Up to this point Abby and I had a few bruises and scrapes but Chloe was bruise free.

A question popped into my mind. “Do I let us give up or do I say, come on, we can do it.”  After much thought I said, “OK, let’s head back down.” We were pretty quiet on the way down. I’m guessing we were all thinking about the falls we would have to descend. Abby had to be at volleyball practice at 3:30pm and Chloe had to work after 4:00pm.

But something must have entered all of our minds during the short trek back down the river. It was as if the river had sucked the confidence from us out through our feet. I could tell they were worried about it and in turn it made me worry. I’ve done alot of hiking, paddling and camping by myself and what I love about it is that I’m only responsible for myself. I don’t like being responsible for other people’s safety. While I don’t mind getting bruised or broken I really don’t want anyone else to get hurt.

This was in my mind as we approached the waterfall. Chloe and Abby edged slowly toward the waterfall and then said, “We don’t think we can do this.” I made my way to the rim of the falls and wiggled around, got on my hands and knees and laid on my stomach to see if I could find foot holds. Not seeing any within reach of my body length I went to the other side of the falls and performed the same investigation. Without Josh or someone at the bottom of the falls to use as a foot hold or to protect us from falling backwards and hitting our head on the sharp rocks below I didn’t think we could do it either.

I didn’t know what to do. I could risk climbing down and getting hurt leaving the girls all alone. At that point it could become an emergency situation leaving the girls helpless to do anything. The girls didn’t want me to risk it. They told me to just stay there and wait for help. I have never been in that sort of situation before. If it had been just me I would have slid down the rocks like I did when I fell but I had them to worry about.  I decided we would wait for help and started yelling for help every minute or so. 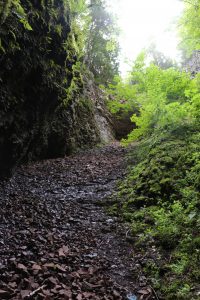 By that time it was around 2:00pm and we would continue to yell for help every minute until around 4:00pm when someone finally heard us. During the two hours we yelled I walked up and down the river and checked the canyon walls for possible climbing routes. It’s sheer, mossy cliff and there was no way I was going to make it up and out of there. The best way would have been to either go back up the river and take the last fall or just descend where we were at. But again, I questioned what the right thing was to do. Chloe and I climbed up a rock slide thinking we might be able to pull ourselves up and over the ledge but knew that too would have been too risky. So we waited and yelled until we heard voices. 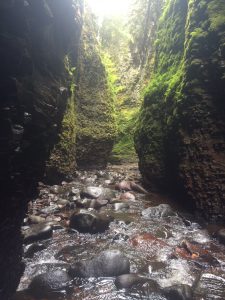