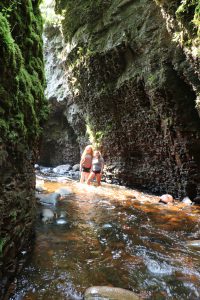 This week I had a taste of humble pie. Well, maybe it was more like an entire humble pie? Not with whip cream on top but with a huge scoop of embarassment on top. Instead of the feeling of an upset stomach after such a large helping of humble pie ala embarassment I felt extremely satiated. What? I was completely humiliated and embarassed but then I was completely satisfied? Wait, I better start from the beginning.

I’ve been complaining all summer about not being able to spend time with my kids. Not because I don’t have enough time but because they don’t really want to spend time with me. On Tuesday I dragged them both to the grocery store and even complained to Linda at check-out how my kids wouldn’t hang out with me anymore so I had to drag them along to shop.

Fast forward to Wednesday and imagine my surprise when Abby asked if I wanted to hike up the Kadunce River with her and Chloe. Really? You want me to come along? OF COURSE I WANT TO COME WITH!!! 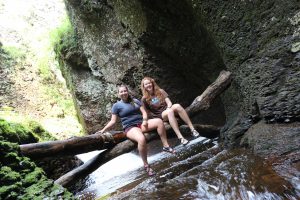 Hiking with the Girls

With happiness in my heart and a six-pack of Voyageur beer(for photos) in my backpack we headed east out of town to the wayside parking area. We were greeted by some folks working on the trail for conservation purposes who said we could hike the trail but there would be some machinery in use on the first portion of the trail. We happily started hiking and eating thimbleberries along the way.

I have hiked at Kadunce numerous times and have hiked it twice this summer already.  I love to start there, hike to County Road 14 and return to Kadunce. The trail is super easy to follow and it’s not too much elevation so it’s a great trail for hikers of any fitness level. Hiking the river itself is a different story. 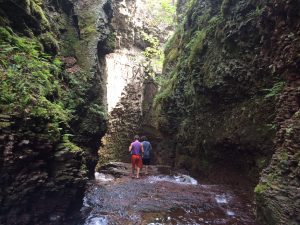 Hiking with the Boys

A couple of years ago Josh and a friend wanted to hike the river because they had heard of other folks doing it. This was before they had driver’s licenses so I was the chauffer and I got to hike with them. We hiked the trail to the bridge where the Superior Hiking Trail crosses(maybe a mile?) and then entered the river. As we descended a particularly slippery and high waterfall I realized why people said they hiked,”Up the Kadunce.” It would be much easier to hike up the river than to have to descend all of the waterfalls.  At one point Josh said I could turn back and take the trail while they continued on but I wasn’t comfortable letting them go on their own nor did I want to admit defeat. It was a beautiful hike and only once(after the first big waterfall we encountered) did I feel scared. It was while descending the falls that would be the 2nd falls if you were actually hiking up the river from Lake Superior.

Josh made the solo, unassisted descent at this waterfall look relatively easy. Even though it was a couple of years ago he was probably 5’7″ and very strong. His length, confidence and strength got him to the bottom without mishap. His friend stumbled a little at the bottom of the falls so I was a little apprehensive but with Josh’s hand to use as a foothold I was down safely in a matter of seconds.  It was a great hike on a beautiful day and a wonderful memory of time together in the great outdoors.

More about the humble pie tomorrow…