Sue Prom Posted on May 5, 2017 Posted in wildfire No Comments Tagged with Ham Lake Fire

As a general rule I don’t re-post blog entries but I am making an exception. With reporters asking questions and folks talking about the ten year anniversary of the Ham Lake Fire I decided to make an exception.  I’m going to re-post my entries from that year.  The photos won’t be the same because I used a different blog platform back then but I’ll try to add some relevant photos once in awhile.

Hopefully I can keep my anxiety level in check when I re-read my entries as it was a very volatile time. I may intersperse with some other blog entries here or there or post more information on Facebook, but then again, maybe not.  As always, thanks for reading. 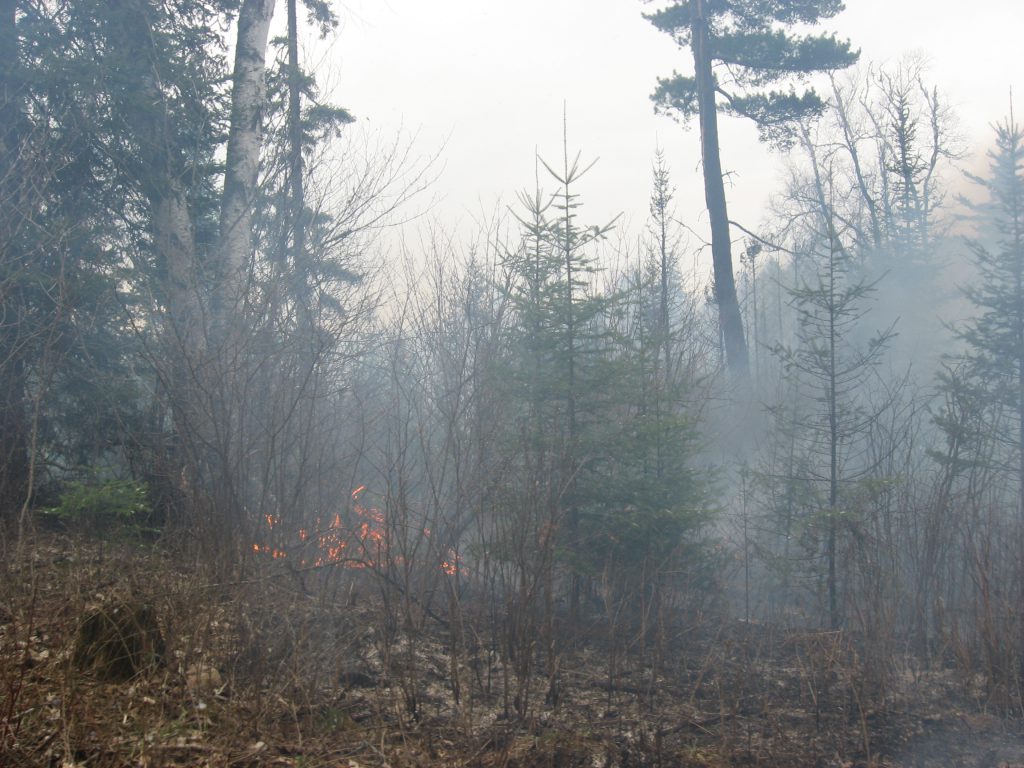 Sometimes you just know when something bad is going to happen.  I woke up with that strange sense of something amiss and when Mike asked about the weather I said the forecast called for 20-30 mile per hour winds the next two days.  I knew with already dry conditions a couple of days of wind would only dry things out more quickly.  As I drove to town I thought to myself, “I hope the winter’s snowfall put out all of the fires from last year, I sure don’t want another fire.”  A few hours later I received a call from Marilyn saying, “Have you heard about the fire?” 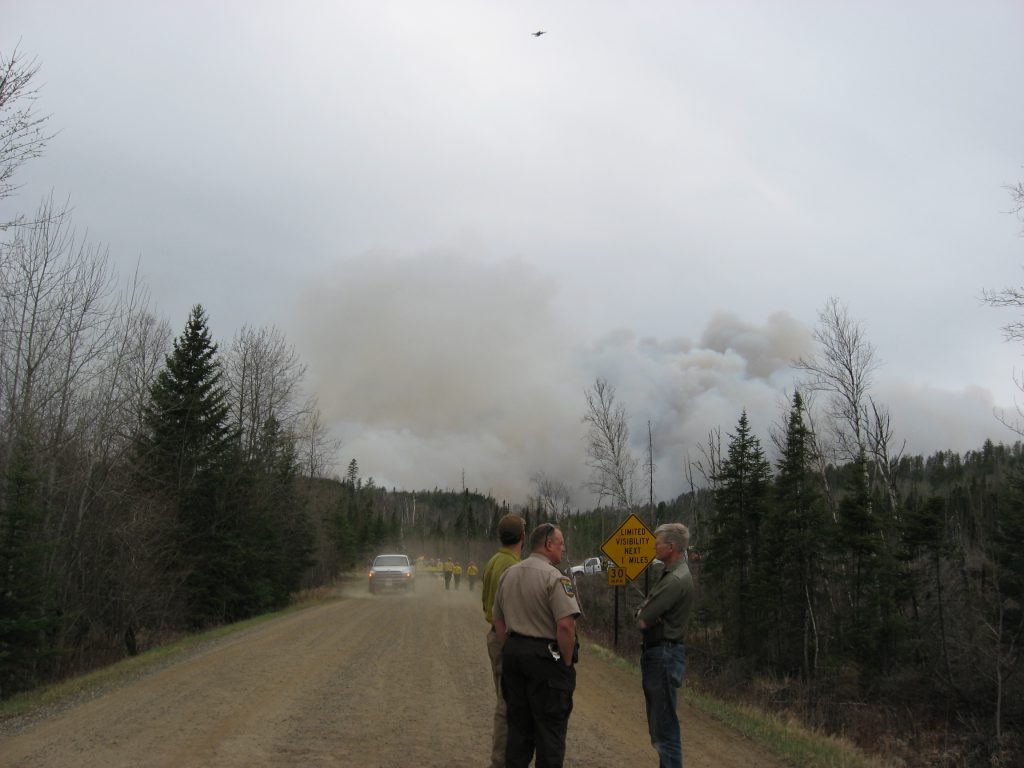 Women’s or Sue’s intuition must have been working overtime today because our good friend Sue Ahrendt also had a strange feeling this morning.  She and her husband Andy own Tuscarora Lodge on Round Lake.  They thought they smelled smoke a little after 11:00 this morning and then their suspicions were confirmed quickly.  A fire started on the Northwest end of Ham Lake just southwest of their resort and home. 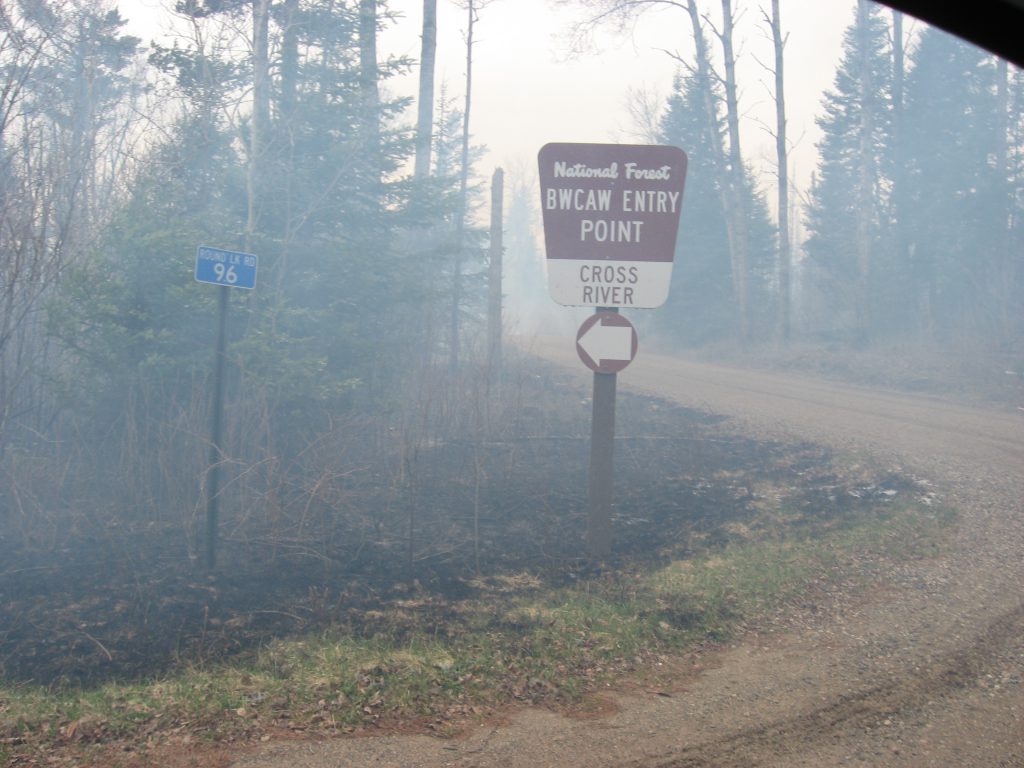 Resources were called in and the fighting of the Ham Lake Fire began.  Only overhead teams were able to work on the fire initially because ground crews were not able to get to Tuscarora Lodge and all of their buildings.  Several aircraft were on scene making drop after drop of fire retardant, foam, and water on the many buildings on the property.  Once the main part of the fire passed Round Lake Road ground crews were sent in. 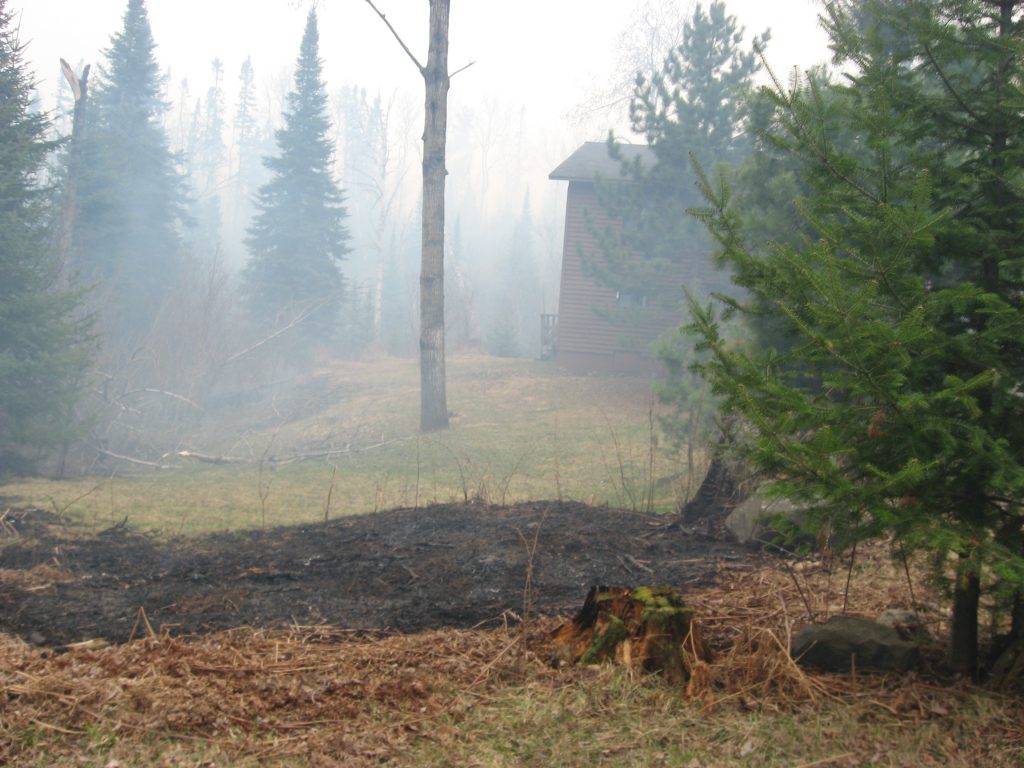 The USFS, DNR, Gunflint Trail Volunteer Fire Department, Arrowhead Electric and Cook County Sheriff’s office were all on scene.  Hot spots and snags were everywhere and crews began work immediately. Two bulldozers dug lines around the perimeter while sawyers dropped trees and cleared areas near buildings.  Sprinkler systems were installed on some buildings and around the perimeter by the GTVFD.

The fire fighting activity lasted all day and well into the evening hour until it was too dark for the aircraft to fly.  Crews will be on scene throughout the evening to help protect the many structures at Tuscarora.  Winds continue to blow from the East South East with gusts up to 20 miles per hour. 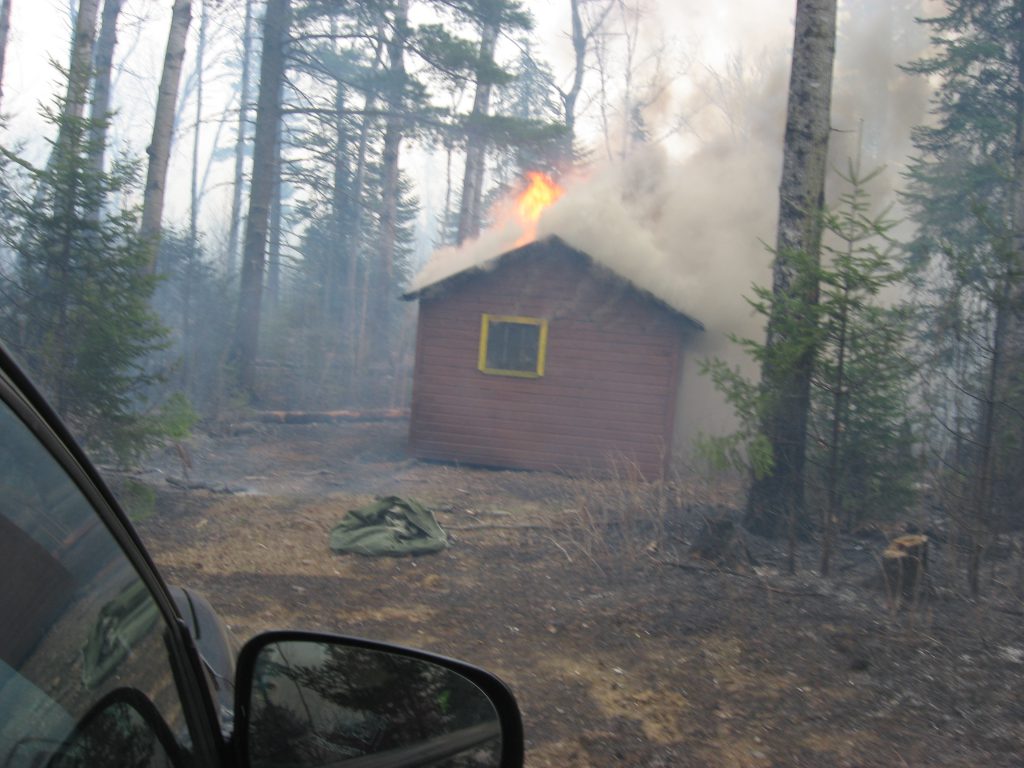 The Ham Lake Fire is approximately 1000 acres in size.  According to the Sheriff’s Department the fire was about 3/8 mile by 2 1/2 miles and had spread to around Honker Lake near the Kekekabik Hiking Trail. There have been no reports of lightening strikes in the area so the best guess at how the fire started was by a campfire.  The forecast for tomorrow calls for more ESE winds up to 20 miles per hour.  This will keep the fire heading toward the south of Seagull Lake and areas that have all been treated by prescribed burns done by the USFS since the 1999 Blowdown. 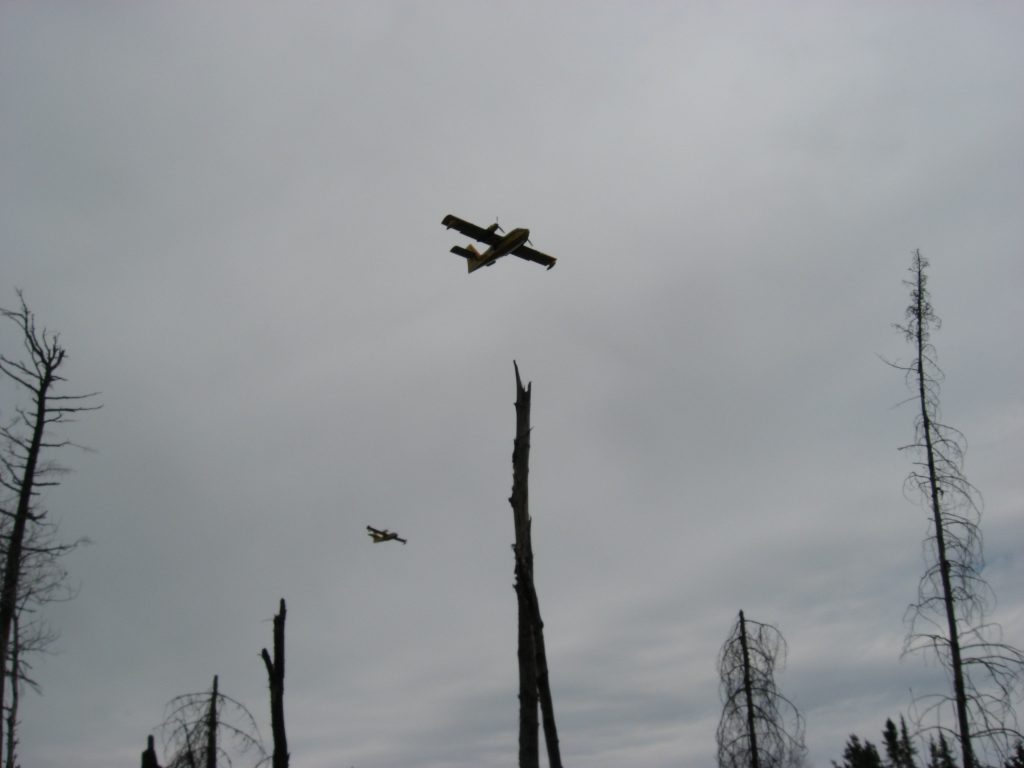 Many thanks go out to the fast acting crews from all of the entities and volunteers involved.  It is amazing that only one little shed burned and no one has been injured.  Thanks to Shari Baker for watching our kids and to Marilyn who fielded all of the phone calls at Voyageur.  Due to the large volume of phone calls we are receiving we ask you to check the blog or e-mail us with inquiries in regards to the fire.  With Mike, Don and I all working as members of the GTVFD that leaves Marilyn to the office and telephone. 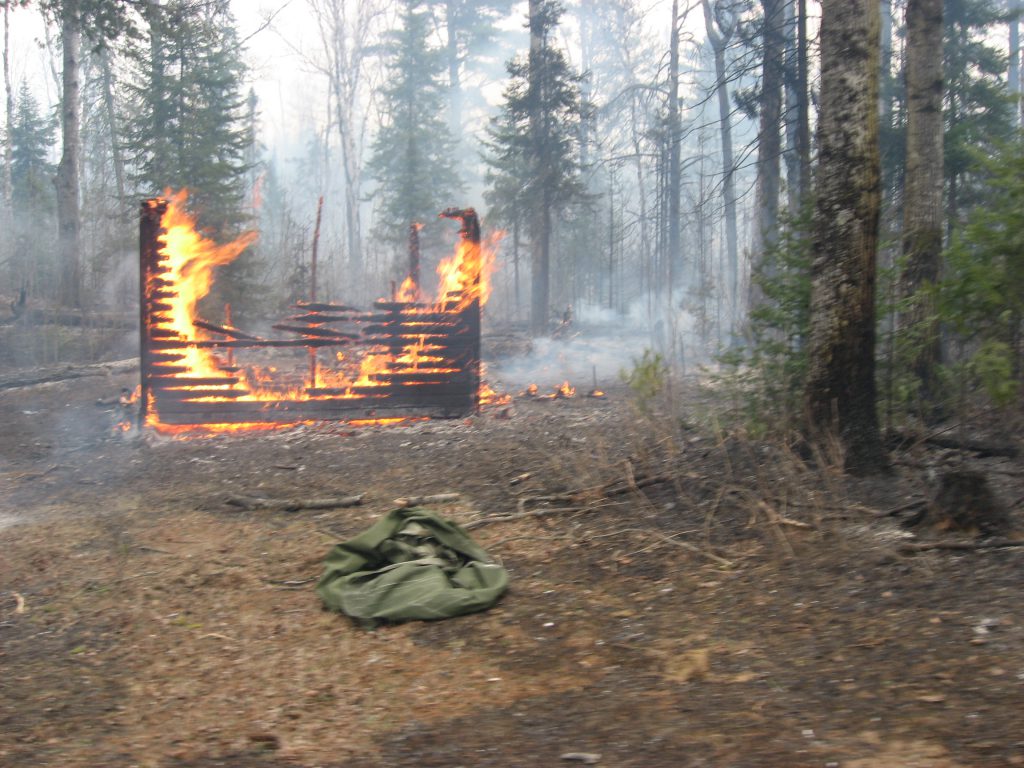 We will update the blog when we know more information.  At this time there are not any closed entry points nor is there a fire ban in the BWCA or Quetico Park. Let’s all do a rain dance and ask Mother Nature to be kind to the Gunflint Trail.