Cairn or No Cairn?

Have you ever built a rock cairn? I personally do not have the patience to build a rock cairn myself but many people do. On Artist Point in Grand Marais there are a bunch of rock cairns people have made. They aren’t marking a trail they are just there because people decided to make them there. There are also a ton of rock cairns near a river in Sedona, Arizona and many other places where some people don’t want to see them.  What do you think about rock cairns? 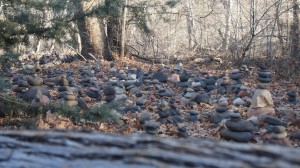 Cairns – seemingly random man made stacks of rocks – can be surprisingly rich in stories and meaning. For thousands of years, cairns have been used by people to connect to the landscape and communicate with others. But what are they communicating?

The word “cairn” dates back to 16th century Scotland and comes from the Gaelic carn, or “heap of stones.” It refers to stone piles ranging from a simple stack to elaborate mounds totalling hundreds of rocks marking Scottish burial sites – some more than 4,000 years old.

Many people today are most familiar with cairns that mark trails for travelers. These cairns may be only a few strategically placed rocks, while others may be massive piles of rocks high on a ridge that are visible for miles. No matter the size or shape, this is a simple way to mark the proper route at a trail fork (especially for those travelers without today’s cell phones and GPS units to guide them).

The purpose and meanings of cairns differ dramatically across cultures and history. Some cairns are built to guide travelers, mark grave sites or serve as an altar or shrine, others reveal property boundaries or sacred hunting grounds, and even predict astronomical activity.

The Navajo people repeatedly place stones on cairns to bring good luck (known as tsé ninájihí). The Inuit people in the high Arctic have more than 50 terms to describe various types of cairns, depending on location, season, and message. The ancient Inca Trail system in South America has countless trailside cairns for guidance known as apacheta. And in Iceland, cairns been given the persona of old women and it’s tradition for people to leave bawdy poems, known as beinakerlingar, or bone crones, inside them.
One of my favorite cairn stories is from 1845, when Sir John Franklin and more than 100 men set sail from England across the Atlantic Ocean to the Northwest Passage. Unfortunately, they never made it.

Two hard winters froze them into the ice, almost 600 miles north of the Arctic Circle. In 1847, one ship broke free and sailed south to a small island where the men left a note in a rock cairn. The note read, “all were well.”

One year later, the men returned to the same cairn and updated their original message. Their leader Franklin and two dozen others were now dead and the survivors were trying to march south to find an escape. Their note, discovered in the cairn nearly a decade later, was the lone piece of written evidence ever recovered from the Franklin Expedition.

While their purpose and meaning differ dramatically between cultures, finding a cairn, a silent messenger in stone, is an enduring reminder of those who have crossed paths before us.