Busy in the Boundary Waters 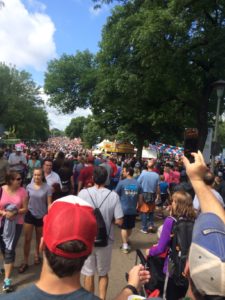 When you see a headline that says, “A Busy Year Ahead in the Boundary Waters,” what does that mean to you? Does it conjure up images of people filled streets during the great get together of the Minnesota State Fair? Does it look like a recreational lake near the Twin Cities where jet skis cross the wakes of speed boats pulling water skiers behind? Is it beaches with people packed side by side like sardines during a pre-covid spring break? To say the Boundary Waters is going to be busy this summer is a bit confusing to me and if it perplexes me then what does it do to people who have never visited the BWCA?

The Boundary Waters Canoe Area Wilderness is a wilderness area that restricts the number of visitors allowed to enter at each  entry point every day. Historically popular entry points are entry points that are directly on a wilderness lake that don’t require a portage to reach the actual entry point. Brule Lake is one of these BWCA entry point lakes people love because you can pull into the landing parking lot, unload your canoe and gear, get onto the water and directly paddle to a wilderness campsite.  There are so many campsites to choose from without ever having to portage except when there isn’t. 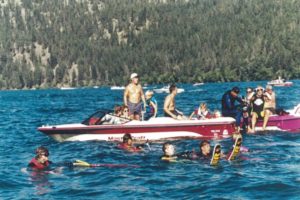 How can there not be an open campsite on Brule Lake when there are way more campsites than the 7 entry point permits allowed on any given day? It’s because people are no longer using these lakes as an entry point into the BWCA, they are using them as their Boundary Waters destination lake. In the past people entered these lakes, paddled through them and portaged to another lake. The next day they would pull up stakes, paddle, portage and move on to another BWCA lake and so on and so forth.

Here’s what happened to me one time when I set out to use Brule Lake as a Boundary Waters base camp destination. It was in the fall on a late Friday afternoon by the time a teacher friend of mine and another companion paddled away from the landing at Brule Lake. In our canoe we had packs, a cooler packed with fresh meat for meals, camp chairs, a blow up air mattress, fishing rods, tackle boxes and much more.  We paddled the shoreline and passed campsites occupied with other people, we could see campfire smoke rising from campsites in distant bays and folks fishing from rocky points at other campsites.  The sun sets early in the fall and as dusk quickly descended upon us we found ourselves standing at a portage into Vernon Lake. It’s a relatively short portage, just 49 rods, but it’s steep and rocky and looking at all of the gear in the canoe we knew we were not packed to successfully portage into another lake under a dark sky. Back in the canoe, exhausted from paddling the length of the lake on both the south and north shoreline, maybe 16 miles or more, we found a lonely campsite straight out from the landing and beached the canoe. 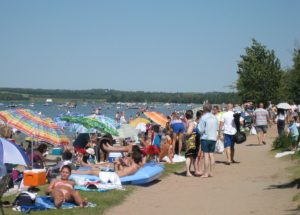 Exhausted, they set up their tent, I hung my hammock and we breathed a collective sigh of relief. We weren’t the first folks to experience this and we certainly weren’t the last. On any given day people are rushing to get to their Boundary Waters entry point and make the most of their precious time off. Most people don’t get on the water at first sunlight and spend their first day traveling to interior lakes of the BWCAW because they don’t have enough time off and want to get on the water as soon as they can. No one plans to not find a campsite but during a “busier” BWCA season we might need to adjust the way we think and pack accordingly.

As a Boundary Waters canoe trip outfitter who has outfitted folks into the wilderness since 1993 I’ve seen the ebb and flow of visitors and am aware of travel patterns. It doesn’t take a rocket scientist to see the trends of how people are camping in the BWCAW.  Take a look around a campsite or peek inside of a latrine and you’ll quickly be able to deduce more people are staying on entry point lakes.

What do these “busy” lakes look like to a person who has never been to the Boundary Waters? On the south west side of Brule Lake there is an almost three mile stretch of shoreline without one campsite on it and on the northwest side another almost two mile stretch of shoreline without a campsite.  Brule Lake has an area of 4272 acres, measures eight miles from east to west, one mile from north to south, is 78 feet deep in places yet only has about 30 campsites on it.  It’s 1000 acres bigger than Lake Waconia in Minneapolis and four times the size of the Minneapolis Chain of Lakes, Lake Harriet, Lake Calhoun, Lake of the Isles, Cedar Lake and Brownie Lake.

I hope you have a better picture in your mind of what a busy Boundary Waters looks like because in reality, it isn’t busy at all. Yes, the campsites at entry point lakes might all be occupied but even if there were 2 times the number of campsites on Brule Lake it still wouldn’t be called “busy” by most people.  Would some locals think Brule was busier than it has been in the past 20 years? Probably. But it certainly isn’t busier than it was during the 20 years before that when there were resorts on the lake, cabins dotting the shoreline, float planes landing and motor boats zooming around. It isn’t busy at all compared to most lakes elsewhere in the world.

Busy is in the eye of the beholder I guess. All I know is if you want solitude in the BWCA it most times doesn’t even take a portage to find it. It’s there on the entry point lakes and it’s on the interior lakes where you will find fewer people. Will all permits on every day of the summer be booked in advance this summer? Will entry point lakes continue to have fewer campsites available? Probably, but that’s an issue only the USFS can remedy by adding more campsites to wilderness lakes. Many of the lakes that are easy to get to can accommodate way more people. The USFS can use the data they collect every year, add and adjust the number of campsites on these lakes and the Boundary Waters still wouldn’t be busy.