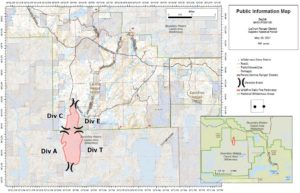 It’s in the news so I thought I should at least mention it in my blog. There’s a small fire burning on the other side of the Boundary Waters that started on May 17th from a lightning strike. It is northwest of Bezhik(Beige–ik) Lake in the Boundary Waters Canoe Area Wilderness on the LaCroix Ranger District of the Superior National Forest. According to MNICS status update today, “The fire area received ½ of an inch to ¾ of an inch of rain. Minimal growth was recorded along the fire perimeter. On site assessments confirmed that 4 structures on private property were destroyed by the fire on May 18 when it exited the Wilderness near the Moose Loop Road. One cabin and three outbuildings were lost…  A Forest Closure Order is in place for Forest Road 464 (Moose Loop), Forest Road 465, BWCAW Entry Point #8 Moose River South, BWCAW Entry Point #76 Big Moose Trail.”

In other news… We received some rain on the Gunflint Trail the last few days and we needed it. Things were getting dry and I feared for the crispy blueberry plants. We’ll have to see what the heat earlier in the week did to the crop and if the rain we received will revive them, my fingers are crossed as last year was not a good blueberry year.