It’s always a sobering thought to think about death but especially when it happens in the Boundary Waters. We received news on the 20th of May a canoe had capsized on Tuscarora Lake and one person was missing. The first assumption whenever we hear a person is missing on a lake in the BWCAW is the person wasn’t wearing a life vest. Next my thoughts immediately go to the folks in the group paddling and camping with the individual.  I cannot imagine the terror or stress of the situation. 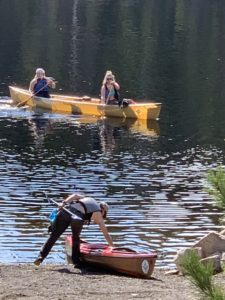 This incident isn’t the first of it’s kind to happen in the Boundary Waters Canoe Area and it won’t be the last. It turns out this individual, Billy Cameron a 29-year old from Indiana, was wearing his life vest and died from hypothermia. I listened to an interview with Billy’s girlfriend on WTIP  and she explained the incident as relayed to her.

Billy was paddling in a canoe with two of his friends on Tuscarora Lake in the Boundary Waters. The canoe capsized and the three friends attempted to right the canoe but waves prevented them from being able to empty the water out or get back into the canoe. After approximately five minutes of being in the water their limbs were numb, after about 15 minutes one individual was drifting in and out of consciousness. Billy attempted to swim to shore and was last seen close to shore and the individual who was conscious isn’t sure why he didn’t make it to shore.

I don’t know how word got out that these individuals were in trouble on Tuscarora. I do know Search and Rescue was called and a USFS float plane flew to the rescue and located the two individuals. They were brought to the seaplane base on Devil’s Track Lake and most likely were met by the ambulance. The float plane went back to look for Billy and since he was wearing his life vest he was found but too much time had gone by and he had passed away from hypothermia.

The ice on most of the lakes of the Boundary Waters Canoe Area typically remains until sometime in May. While areas like the Twin Cities of Minnesota or other places farther south have had ice free lakes and warm temperatures in May we can still find snow in the forest. The lakes of the BWCA are deep and even in mid-summer can be dangerously cold. Hypothermia can happen during any month of the year in the Boundary Waters and Quetico Park and indeed it has. 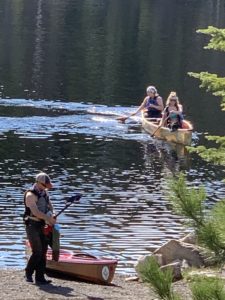 How can you prevent death by hypothermia in the Boundary Waters?  While you’re never 100% safe and secure in the wilderness the best advice we can give you is, always paddle close to shore and always wear your lifevest. If you can reach shore in less than five minutes you have a much better chance of surviving than you do by staying in the water.  On the 20th of May the air temperature recorded at the end of the Gunflint Trail reached 79 degrees and the sun was out in full force. If the three friends could have made it quickly to shore they could have stripped out of their wet clothes, performed jumping jacks or snuggled in the sunshine together to raise their body temperature and they would have had a scary but funny story to tell. Unfortunately they were paddling too far from shore when they capsized and their friend is no longer with them.

Our thoughts and prayers go out to Billy’s family and friends. We don’t want to have to tell another story about someone else dying in the Boundary Waters, especially not due to drowning or hypothermia. These two things can be prevented so please, wear your life vest and paddle close to shore.