I want to share a guest post with you but will first tell you about an experience I once had.  I was walking a trail with my mountain bike from a lake to a logging road.  I stepped into a wet spot and my foot sunk into the muck. I attempted to pull my foot out as the mud slurped and suctioned the Chaco sandal with the toe strap right off of my foot.  How on earth could it pull the shoe off of my foot with a toe strap? I have no idea. I was only able to pull my foot out with assistance from a strong friend. When we reached down to retrieve the shoe it was nowhere to be found. We dug and dug but the bugs were ferocious so we left with one shoe on my foot and one shoe in the muck.  I want to return to see if I can find my lost shoe, but I haven’t had the time to yet… 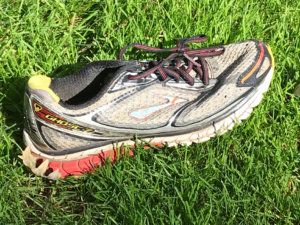 Are you missing a shoe from your recent BWCA trip?  Let me know and I will send it to you.

Back in mid-June, my wife and I put in at Sawbill and paddled the Cherokee Loop.

We were portaging from Ada to Scoop Lake.  The first of two portages was a short 1 rod.  But we kept following what appeared to be the portage and it seemed to grow longer and more precarious.  More and more muddy.  We thought we must of missed where to put in, but the “portage”was well traveled.  About half way through this slog, I sank into the mud to my thigh.  I managed to get the canoe off my shoulders and began to extract myself from the bog.  As I did this, my right water shoe was sucked off by the mud as I was lifting my leg out.  THWACK! My wife arrived and saw me covered in mud and with no right shoe.  After she stopped laughing, I set out digging for my shoe.

As I was digging with my feet and my arms up to my shoulder in mud, she said, “well, if you don’t find it, you can always use this shoe.”  I looked up and saw she had a running shoe that was covered

in dried mud.  She said, “it is a right shoe.”  I laughed.  What?  In this pristine wilderness, you just found a shoe?  Yep, she said.  “Just next to this supposed “portage” where the bog dries.”

I cleaned it up. Put it on.  It fit pretty well.  The shoe carried an appropriate name: GHOST 7.  I guess for lucky 7.

My wife gave me another 20 minutes to find my water shoe, before we had to push on, now with my new GHOST 7 on my right foot and my water shoe on the left.  About a minute before the designated period ended, I touched what I thought was my water shoe as I was digging with my leg.  The water shoe floated to the surface as the buzzer sounded.

While, I did not need to use the GHOST 7 running shoe, I decided to take it with us.  I thought maybe someone had lost it, like I had lost my shoe.  Later, perhaps it floated to the surface, where my wife found it.

But as time passed, I began to wonder if the GHOST owner actually left it there on purpose.  Clearly violating BWCA protocol, as he (less likely she with a men’s 11) had left it there, in case some other poor paddler would lose their shoe where he did.

Well, hopefully the true owner of GHOST 7 will come forward and solve this mystery and be reunited with their long lost right running shoe.

PS I washed the shoe, before taking this photo.