Taconite Harbor and the Railroad Ghost Town: Taconite Harbor. I again found myself in awe of the Taconite Harbor area. Most people drive beneath the railroad bridges and past the harbor giving little thought to the history of the area. I know I didn’t give it much thought the first handful of times I sped past it on the way down the shore. It was probably for a pit stop when I  found myself in an overgrown area that looked like it had once been inhabited. This was before 2001 when a small craft safe harbor was created there on Lake Superior.  I was curious and after a little research I found out there had once been an actual community of people living at Taconite Harbor.  It’s a great story and you can learn more about it at the Center or on this website. It isn’t the community of Taconite Harbor I wanted to write about today, it’s the railroad and more specifically the railroad tunnel that was used to transport taconite pellets from Hoyt Lakes to Taconite Harbor.  “The 72-mile private taconite-carrying railroad was famed for its fleet of F9s, which remained in operation from when the railroad opened in 1957 until the last train operated in July 2001. The trains pass through 1,800-foot Cramer Tunnel (the longest railroad tunnel in Minnesota) and descend an 8-mile, 2% grade through deep cuts of basaltic rock and across high fills to Taconite Harbor.” The tunnel and railroad are no longer in use today but it sure is a neat place to explore. 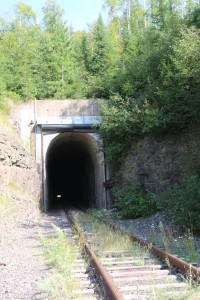