Save the Boundary Waters from destructive non-native invasive species

It’s a special time of the year on the Gunflint Trail. The trees are budding and new plants are emerging from the earth every day.  Living on the Gunflint Trail is a privilege we don’t take lightly. The Gunflint Trail is surrounded by the Boundary Waters Canoe Area Wilderness and by choosing to live on the edge of this wilderness we are in a sense responsible for protecting it. We encourage everyone to help prevent non-native invasive species from entering the Boundary Waters and this includes Lupinus polyphyllus.

Yes, those lovely spiky flowers that fill the ditches from Duluth to Canada along Highway 61 are non-native invasive species that do not belong anywhere in Minnesota. Large-leaved Lupine is native to the Western US and was introduced to Minnesota by gardeners. They have made their way to the Gunflint Trail and are on the verge of spreading into the BWCAW where they will destroy and alter the landscape forever.

When lupines are allowed to spread they overtake areas and prevent native wildflowers from thriving in their own habitat. When the native wildflowers can’t survive then neither can the insects, birds and other wildlife that depends upon them for their existence. Lupines are dangerous because they can spread both through their rhizomes underground and above ground with their seeds that are easily carried and spread. The seeds in their pods can remain viable for decades and once they’ve escaped into the wild, the plants put out dense canopies of leaves that shade out native species. Their seeds are highly toxic and their pods and leaves can kill animals. 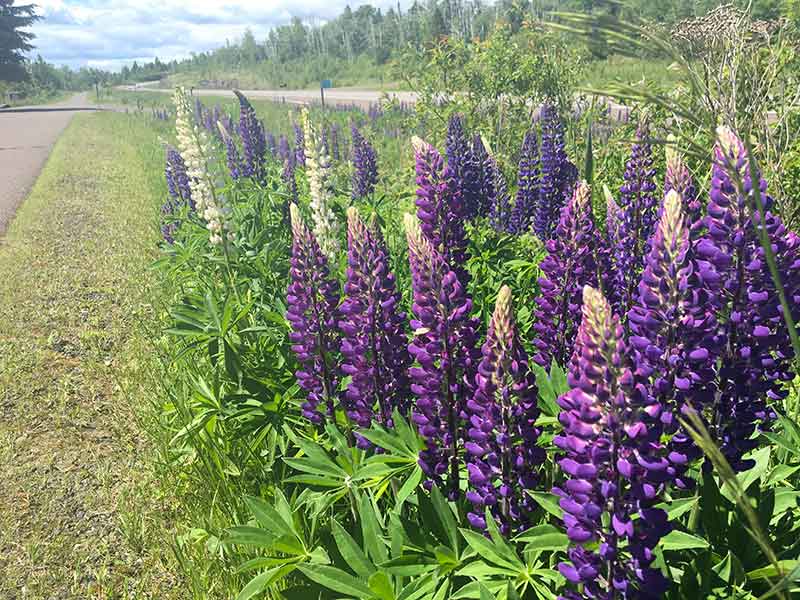 There are many people who love to look at the ditches filled with these colorful flowers. I think people would equally enjoy seeing ditches filled with native wildflowers especially knowing they aren’t damaging the ecosystem.  There are many other non-native invasive species growing in our County and we need to be just as diligent at preventing their spread into the BWCAW.

It would be wonderful if the lupine just stayed on the North Shore and far away from the Gunflint Trail and the Boundary Waters Canoe Area Wilderness. Unfortunately they spread easily on their own and they don’t know where a garden ends and the Boundary Waters begins. People can help prevent this from happening by not planting lupine and by removing them when they see them encroaching on sensitive areas.

The only place lupine are found naturally in Minnesota is in southeastern and east central Minnesota. This plant is much smaller and is known as Wild Lupine(Lupinus perennis). What can you do to save the Boundary Waters from lupines? For starters don’t plant them anywhere near the BWCAW. If you own property with lupines on it then attempt to eradicate them. This will no doubt take years as they thrive and survive anywhere. They are easiest to pull in the spring when the ground is wet but you have to make sure you get their entire root or they will just grow back. You can attempt to dig them out but again you need to make sure you get their entire root system. If you don’t get all of them and they do grow up then mow them before they have a chance to bloom. If they have gone to bloom then remove the flower that contains the seed pod, place them in a garbage bag and throw them away so they won’t spread. You can always spray to kill them but I haven’t researched how to do that yet.

There are threats to the Boundary Waters you can control and other ones you can’t. If you can do something to protect the native species in the wilderness then I encourage you to do so. The native plants, insects and wildlife will thank you.

Find more information by visiting the websites below.