No Bugs in the BWCA Yet

The positive side to this chilly spring we’ve been experiencing is the lack of bugs. As soon as the weather warms up the bugs will no doubt appear. Not too long ago there weren’t any wood ticks on the Gunflint Trail but there are now. What’s the best way to avoid tick bites? Read below to find out. 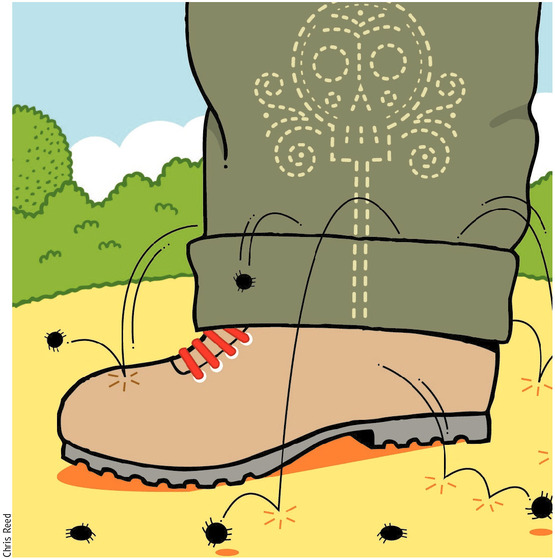 Wearing clothing pretreated with the insect repellent permethrin significantly reduced tick bites in outdoor workers compared with taking routine tick-prevention measures, according to a study in the May issue of the American Journal of Preventive Medicine.

An estimated 34,000 cases of tick-borne illnesses, including Lyme disease, are reported to the Centers for Disease Control and Prevention every year.

Researchers at the University of North Carolina recruited 133 state-employed outdoor workers during tick season in 2011 and 2012. The workers were 39 years old, on average, and more than a third had reported previous tick bites.

From mid-March to the end of September, one group of 67 workers wore uniforms, including hats and socks, treated with permethrin, a nontoxic chemical used in insect repellents. The treated clothing was expected to retain its tick-repellent properties for at least 70 washes, researchers said. A control group of 66 workers wore untreated uniforms. (Workers were unaware of their uniform type.)

All of the subjects recorded tick bites in log books, including the time, place and location on the body. Tick removal kits were provided so the ticks could be collected and identified.

During the first tick season, 84 tick bites were reported by 64 subjects in the permethrin-treated clothing group. This compares with 493 bites reported by 63 people in the control group.

Permethrin-treated clothing is used by the U.S. military and is available for consumers, according to the Environmental Protection Agency.

Caveat: As socks tend to wear out more quickly than other clothing, it was likely that subjects in the permethrin group wore untreated socks at times, researchers said. The National Pesticide Information Center cautions that permethrin shouldn’t be sprayed on skin and should be applied to clothing when it isn’t being worn.