This year there are several Super Moons according to the unscientific type. I probably know more about the Blue Man Group or Blue Moon Beer than I do a Supermoon but I know I will be watching the real moon on July 12th. And with a little luck I’ll be doing it from a Boundary Waters campsite!

Would the Real ‘SuperMoon’ Please Stand Up? 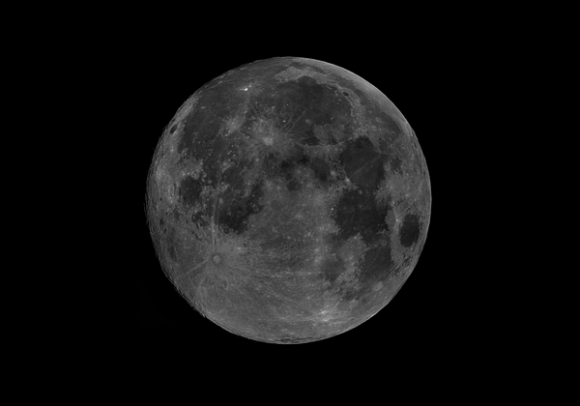 ‘Tis the season once again, when rogue Full Moons nearing perigee seem roam the summer skies to the breathless exhortations of many an astronomical neophyte at will. We know… by now, you’d think that there’d be nothing new under the Sun (or in this case, the Moon) to write about the closest Full Moons of the year.

But love ‘em or hate ‘em, tales of the “Supermoon” will soon be gracing ye ole internet again, with hyperbole that’s usually reserved for comets, meteor showers, and celeb debauchery, all promising the “biggest Full Moon EVER…” just like last year, and the year be for that, and the year before that…

How did this come to be?

What’s happening this summer: First, here’s the lowdown on what’s coming up. The closest Full Moon of 2014 occurs next month on August 10th at 18:11 Universal Time (UT) or 1:44 PM EDT. On that date, the Moon reaches perigee or its closest approach to the Earth at 356,896 kilometres distant at 17:44, less than an hour from Full. Of course, the Moon reaches perigee nearly as close once every anomalistic month (the time from perigee-to-perigee) of 27.55 days and passes Full phase once every synodic period (the period from like phase to phase) with a long term average of 29.53 days.

And the August perigee of the Moon only beats out the January 1st, 2014 perigee out by a scant 25 kilometres for the title of the closest perigee of the year, although the Moon was at New phase on that date, with lots less fanfare and hoopla for that one. Perigee itself can vary from 356,400 to 370,400 kilometres distant.

But there’s more. If you consider a “Supermoon” as a Full Moon falling within 24 hours of perigee, (folks like to play fast and loose with the informal definitions when the Supermoon rolls around, as you’ll see) then we actually have a trio of Supermoons on tap for 2014, with one this week on July 12th and September 9th as well.

What, then, is this lunacy?

Well, as many an informative and helpful commenter from previous years has mentioned, the term Supermoon was actually coined by an astrologer. Yes, I know… the same precession-denialists that gave us such eyebrow raising terms as “occultation,” “trine” and the like. Don’t get us started. The term “Supermoon” is a more modern pop culture creation that first appeared in a 1979 astrology publication, and the name stuck. A more accurate astronomical term for a “Supermoon” is a perigee-syzygy Full Moon or Proxigean Moon, but those just don’t seem to be able to “fill the seats” when it comes to internet hype.

One of the more arcane aspects set forth by the 1979 definition of a Supermoon is its curiously indistinct description as a “Full Moon which occurs with the Moon at or near (within 90% of) its closest approach to Earth in a given orbit.” This is a strange demarcation, as it’s pretty vague as to the span of distance (perigee varies, due to the drag of the Sun on the Moon’s orbit in what’s known as the precession of the line of apsides) and time. The Moon and all celestial bodies move faster near perigee than apogee as per Kepler’s 2nd Law of planetary motion. 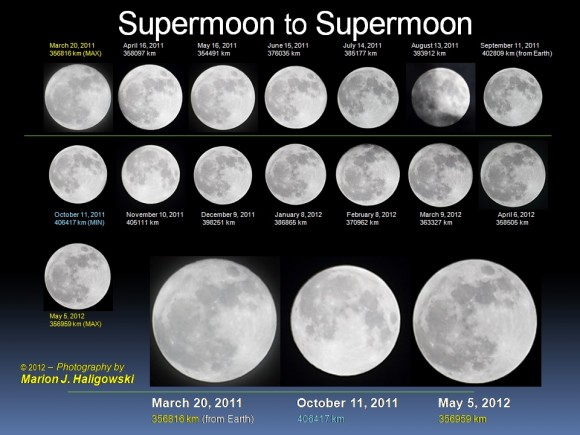 A photo essay comparing Full Moon sizes and appearance from one Supermoon to the next, spanning 2011-2012. Credit: Marion Haligowski/RadicalRetinscopy. Used with permission.

We very much prefer to think of a Proxigean Moon as defined by a “Full Moon within 24 hours of perigee”. There. Simple. Done.

And let’s not forget, Full phase is but an instant in time when the Moon passes an ecliptic longitude of 180 degrees opposite from the Sun. The Moon actually never reaches 100% illumination due to its 5.1 degree tilt to the ecliptic, as when it does fall exactly opposite to the Sun it also passes into the Earth’s shadow for a total lunar eclipse.

The truth is, the Moon does vary from 356,400 to 406,700 kilometres in its wonderfully complicated orbit about our fair world, and a discerning eye can tell the difference in its size from one lunation to the next. This means the apparent size of the Moon can vary from 29.3’ to 34.1’ — a difference of almost 5’ — from perigee to apogee. And that’s not taking into account the rising “Moon illusion,” which is actually a variation of an optical effect known as the Ponzo Illusion. And besides, the Moon is actually more distant when its on the local horizon than overhead, to the tune of about one Earth radius.

Like its bizarro cousin the “minimoon” and the Blue Moon (not the beer), the Supermoon will probably now forever be part of the informal astronomical lexicon. And just like recent years before 2014, astronomers will soon receive gushing platitudes during next month’s Full Moon from friends/relatives/random people on Twitter about how this was “the biggest Full Moon ever!!!”

Does the summer trio of Full Moons look bigger to you than any other time of year? It will be tough to tell the difference visually over the next three Full Moons. Perhaps a capture of the July, August and September Full Moons might just tease out the very slight difference between the three.

And for those preferring not to buy in to the annual Supermoon hype, the names for the July, August and September Full Moons are the Buck, Sturgeon and Corn Moon, respectively. And of course, the September Full Moon near the Equinox is also popularly known as the Harvest Moon.

And in case you’re wondering, or just looking to mark your calendar for the next annual “largest Full Moon(s) of all time,” here’s our nifty table of Supermoons through 2020, as reckoned by our handy definition of a Full Moon falling within 24 hours of perigee.

So what do you say? Let ‘em come for the hype, and stay for the science. Let’s take back the Supermoon.