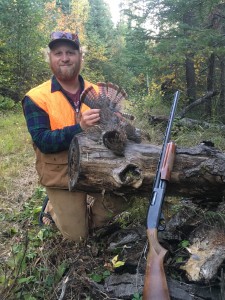 I haven’t been out grouse hunting yet this year. I call it hunting but I usually just go along for the hike while Josh hunts.  This year he’s been too busy to hunt so I haven’t gone either.   Matt and the crew have been seeing a few grouse and eating them too!

Here’s a strange report from a Conservation Officer about a grouse hunter.

CO Darin Fagerman (Grand Marais) reports one of the busiest fall weekends he has ever seen. Lots of leaf lookers, photographers, and grouse hunters. Grouse can be found off the beaten path and a few people have reported some success. The officer came across a woman who was road hunting with a fully loaded shotgun in her vehicle. When asked why her shotgun was loaded, CO Fagerman was surprised when she stated that she didn?t know how to load or unload the shotgun so her husband loaded it for her. Then he’d unload any rounds left after she got done hunting. Enforcement action was taken for AIS, ATV violations, and loaded shotguns in motor vehicles.