Grouse attack on the Gunflint Trail

Have you ever been threatened by a grouse? They are small but fierce creatures who are very protective of their young. I have never been attacked by a grouse but I’m pretty sure if I hadn’t kept on my merry way I most certainly would have been.

On Tuesday I went for a walk and in the distance I saw a grouse standing in the middle of the road. This is actually quite common as they like to sun themselves on trails and roads.  As I approached the grouse she fluffed her feathers up and began to walk around in circles dragging one wing on the ground. If I hadn’t just seen her standing upright and completely unharmed I would have thought she had been hit by a car. Her theatrics continued with dust from the road billowing up behind her until I got closer. Then she changed her helpless routine to one of dominance and aggression.  With feathers fluffed and chest held high she approached me hissing. I told her I wasn’t going to harm her or her chicks but she wouldn’t back down. I sidestepped her and continued on my way. She pursued me until she was sure I was not coming back and then she quickly waddled into the ditch where I’m sure her brood was waiting patiently for her return. 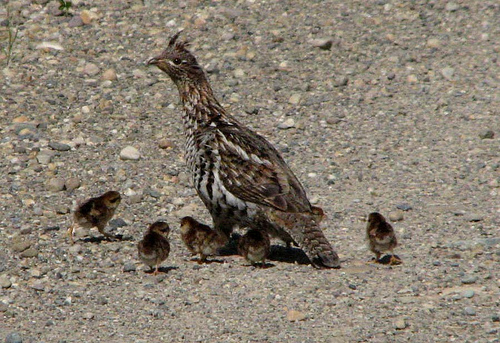 On Wednesday I went on another walk and encountered another grouse in a totally different place. This time I saw the mom and a few of her chicks on the road and I knew that I was in for another grouse attack. Her fake broken wing act was not as convincing as the grouse from the day before but a newbie to grouse tactics may have fell for it. I continued walking and sure enough her wing heeled miraculously and she hotly pursued me hissing loudly with feathers fluffed. I didn’t change direction and for a second I thought maybe she will actually take flight and peck my eyeballs out. But as soon as she felt I was far enough away she turned back to her chicks and huddled them together leading them down into the ditch.

Grouse mommas are quite similar to human mommas. They care deeply about their young and will protect them at any cost. Hopefully my acting is better than a grouse.