Sue Prom Posted on April 22, 2017 Posted in wildlife No Comments

Check out the update about the eaglets! 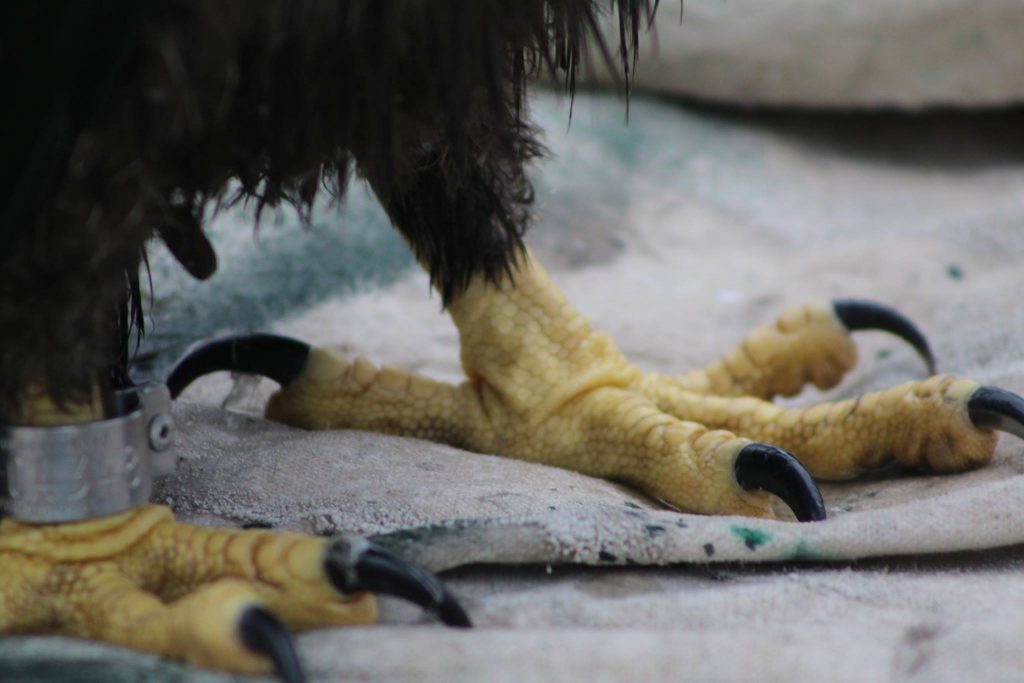 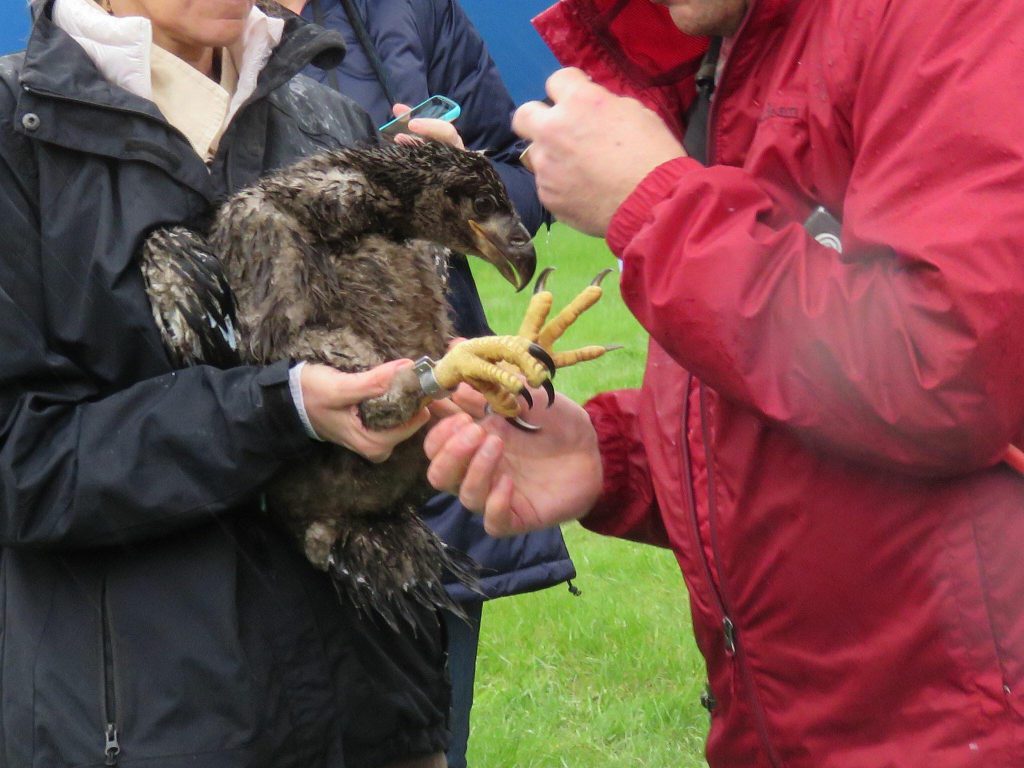 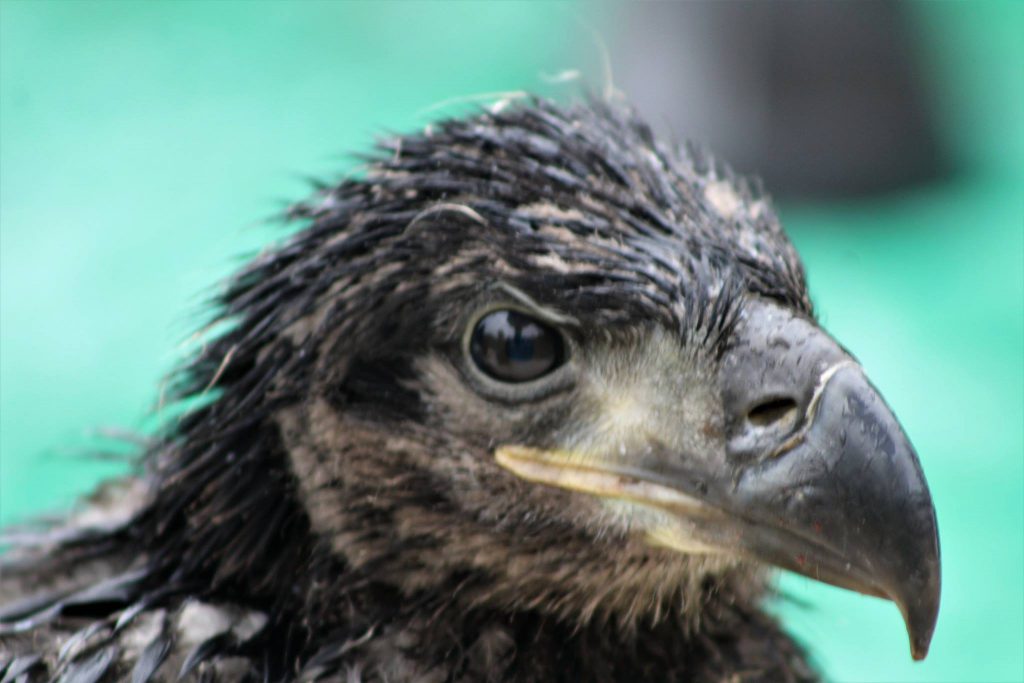 It was a rainy day, but as soon as the bucket truck showed up, the rain stopped!  Most of us still got pretty wet, but the chicks got new jewelry on their right legs.  The light-weight, silver identification tags are numbered and will be recorded with the Bird-banding Laboratory in Laurel, Maryland.  The numbers on the band will help identify them if they ever nest where there is a camera, or if they end up injured or found dead in the future.  Reading the numbers and contacting the lab will trace their birth-place, sex and age, as well as determine cause of death.  Keeping track of this data is very important for the future of the species.  If many of the same bird species or in the same area die and we can find the cause of death, maybe an existing threat can be eliminated from their environment, such as DDT was many years ago.  For more information on the bird banding lab and the importance of banding birds, please see their website here.

In addition to banding, measurements of their halux (the hind toe), the culmen (upper ridge of the upper mandible), and of the blood feathers on the tail were recorded.  Each of these measurements helps determine the approximate sex and age of the chicks. So, #1 chick was hatched on March 9th, and is a female.  Chick #2 and #3 both hatched on March 11th and were a female and a male.  The bands chosen differ in size due to the sex. The females are 1/3 larger than the males, so the female bands are larger. They are banded at about the age of 6 weeks because at this age, they are still too young to jump from the nest, yet they are old enough to be handled and to fit them with the appropriate band.

After the banding, the chicks were quickly returned to the nest and the parents also returned within 10 minutes. All three eaglets were being fed within an hour.  The parents are not aggressive toward the crew.  They tend to soar above or perch in a near-by tree until the chicks are returned to the nest, which usually happens after the bucket-truck is gone from the area.  The parents might be getting used to this activity, because the bucket was barely moving away from the nest as the female returned to count bodies and toes.

The chicks will continue to be fed by the parents for the next few weeks – until fledging. Eventually, the eaglets will begin taking their own bites of food from the cache that is dropped off by the parents.  They will become much more physical – exercising their legs and especially their wings.  Later, they will begin to “branch”.  They will move to branches close-by, stretching their wings and testing their flying abilities.  By mid to late June, they should begin to fledge (leave the nest).  They will continue to visit the nest until they become experts at flying and hunting for their own food.  Some of the chicks from past years are still seen at the nest occasionally!

Our sincere appreciation goes out to the private bander Mark Martell, and to Xcel Energy for providing their staff and resources for this project.  Without them, we would not be learning about the private lives of these eagles and watching the camera every season.  Thanks to all of you who make this effort a success!

DNR Update- Wildlife experts band eagle chicks on tax day
The three eaglets featured on the DNR’s popular EagleCam had metal bands placed on their legs today as part on an ongoing research project. Today was chosen to band the eaglets because they are about six weeks old, which is the perfect age for banding.

In addition, today is tax day.  Why is this significant for banding eagle chicks?  Because the generous donations to the Nongame Wildlife Program on state income tax forms provided the funding for EagleCam. The live video feed will be available during the entire nesting season.

The chicks were measured and weighed and were fitted with light-weight silver U.S. Wildlife Service bands that will help identify them throughout their lives.
The sex of the chicks was determined to be one male and two females.
Chicks are banded at about six weeks because they are old enough for the band to fit their growing legs, but are too young to jump out of the nest when approached.
The chicks were not harmed and the parents will not abandon them; they have invested too much time at this stage to leave their chicks and are not bothered by human scent.
The adult female eagle has been wearing a band since 2010.
A private bander, Mark Martell, and staff from DNR Nongame Wildlife Program did the banding.
The chicks will leave the nest or “fledge” sometime in mid-to-late June.
Xcel Energy provided the bucket truck and crew to retrieve the chicks. Xcel provides this service to the DNR each year without a fee. The DNR and the Nongame Program extends sincere appreciation to Xcel Energy for providing their excellent staff and resources.
This research is paid for by donations to the Nongame Wildlife Program:  www.dnr.state.mn.us/nongame/donate/index.html.
Photos, stories and updates are available on Nongame’s Facebook page. www.facebook.com/MinnesotaNongameWildlifeProgram