Dog Found in the BWCA after 11 days 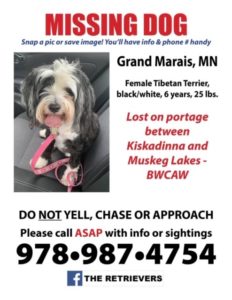 A dog went missing on portage in the Boundary Waters on September 17th. Eden is a Tibetian Terrier and only weighs around 25 pounds. When we heard the news about the dog being lost on the portage between Kiskadinna and Muskeg Lakes near Long Island Lake we immediately wanted to go search for it. Unfortunately schedules wouldn’t allow us to and after the owners spent three days searching they had to give up and return home.  I can’t imagine how awful that must have been for them.  As the days continued to pass we didn’t think this story would have a happy ending but thankfully it does.

Eden was found by campers on Tuesday about five miles from where the dog went missing.  They didn’t know about the missing dog but when they got out of the BWCA and into cell phone range they called the number on Eden’s collar and reached the ecstatic owners.

This is one of those stories that warms the heart. If only Eden had been wearing a camera that could have recorded her adventures over the days she survived alone in the Boundary Waters. If she could speak what a story she would tell. 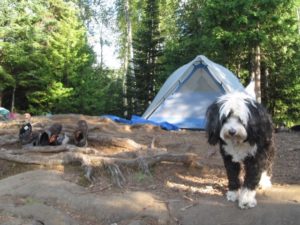