It’s hard to believe Chik-Wauk Museum and Nature Center has been open for 5 years already. It seems like yesterday I was visiting with Ralph and Bea but I guess it’s been a few years.

One visit to their place will most likely hold a permanent space in my memory. It was July 4th, 1999, the year of the big blowdown. I was concerned about them after the storm cleared so I drove over to check on them. Trees blocked their driveway so I parked at the end of the road and walked in.  I knocked on their door and no one came so I knocked a little harder and yelled out.  I was beginning to panic when Bea came to the door looking a little sleepy.  I asked her if everything was ok and she said, “Yes, why?” I told her about the big windstorm and she said she and Ralph had been napping and didn’t even know there had been a storm. I was glad they were fine and said we’d have someone come clear their road with the chainsaw in awhile in case they needed to get out.  Now both Ralph and Bea are gone but Chik-Wauk remains.

To celebrate the anniversary the Gunflint Trail Historical Society is having a dinner fundraiser catered by Valentini’s Restaurant in Duluth. It will be held at the Seagull Lake Community Center on July 5th and tickets can be purchased online. If you can’t make the dinner but still want to support the museum and the expansion you can do that online too. 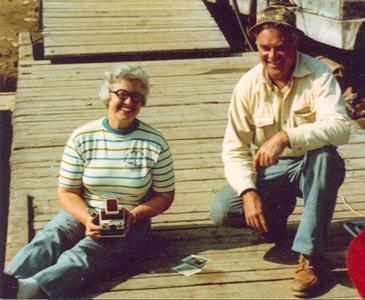