November is here and snowflakes have begun to fall. The air is crisp, the leaves are down and all things in nature are preparing for the approaching winter. I’m not sure where October went or how it passed so quickly but one interesting tidbit from the month is the fact there was a rare tornado touchdown in the Boundary Waters Canoe Area.

There were weather alerts and warnings in our area on the evening of October 10th but no one saw immediate signs of severe weather. It wasn’t until later when cabin owners around Clearwater Lake mid-trail did some exploring and found signs of high wind. Then further exploration via satellite and airplane confirmed damage to trees in the forest. Everyone did their part and it was determined by the National Weather Service an EF2 tornado touched down on October 10th.

The tornado was on the ground from 6:10 p.m. to 6:20 p.m. and traveled along a four-mile track near Alder, Rocky and Clearwater lakes in the BWCA and over the Border Route Trail, according to the NWS. It had a maximum width of 500 yards with winds topping out at an estimated 120 mph. 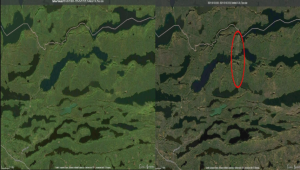 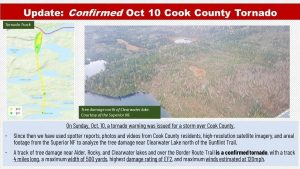