Home › wildlife › Bears in the Burbs, BWCA and Beyond

Bears in the Burbs, BWCA and Beyond

There’s lots of talk about bears recently. This is the time of the year when the black beauties are most hungry and tend to frequent places they might find an easy meal. One of these such places is Voyageur Canoe Outfitters.

We do try our hardest to keep Voyageur clean and unattractive to bears but their noses are just too good not to notice our smells.  Elsa is a fabulous cook and when she grills outside you can bet a bear within a mile radius will be salivating. Combine that with several garbage cans and a dumpster on our property and you’ve created a Bear Buffet.

We’ve had one small bear visiting as well as a mother with her two young cubs. While they might be cute they do make a big mess if allowed to get into the garbage. They will also make Voyageur a regular stop on their route even when the berries come if we aren’t careful.

I haven’t heard of any reports of bears in the BWCA yet but if campers aren’t good about keeping a clean site reports will no doubt begin. Once a bear makes a campsite a regular stop then it can make camping at that Boundary Waters site impossible for the rest of the season so please do your best to keep a clean campsite.

Bears in suburbs: DNR says leave them alone unless they’re a threat

Mosquitoes aren’t the only unwelcome visitors showing up around the metro region lately, as several suburban communities recently have reported bears, leading the Minnesota Department of Natural Resources to ask for the public’s cooperation in dealing with nuisance wildlife.

While a Twin Cities suburb may seem an unlikely place to see a bear, such sightings are not uncommon, especially in the spring. Most such bears are young males searching for their own territory after emerging from hibernation and being chased off by their parents. If left alone, they will often move on to an area with fewer people and less opportunity for problems.

Occasionally, however, a bear shows up in a heavily populated area and presents a public safety threat. Such situations should be reported to the local law enforcement agency, which may need to dispatch the bear. Bears that show up inside the Interstate 494/694 loop are generally considered a public safety threat because of the dense human population and the amount of roads and traffic.

“A public safety threat is a public safety threat, whether it’s a guy wielding a knife or a startled or frightened large mammal with big teeth and sharp claws in a neighborhood with lots of kids,” said Capt. Greg Salo. “Your first call should be to the local police department. No one likes to see these animals killed just for being in the wrong place at the wrong time, but sometimes that’s the only real option.”

Salo pointed out that shooting a bear with a tranquilizer dart, then transporting it elsewhere is mostly Hollywood fiction. Chemical immobilization requires special equipment, training and access to controlled substances. Most DNR staff don’t have that. Even if they did, the effect of the tranquilizer is not immediate, so a darted bear could run into a crowd or a busy street before passing out. Furthermore, finding a suitable place for relocation can be a challenge. Once a bear is habituated to human derived food, it is likely to repeat this feeding behavior if released elsewhere. Sometimes bears don’t recover from the tranquilizing and handling ordeal.

“That kind of stuff looks good in the movies, but it doesn’t work that way in the real world,” Salo said. “What’s more, dealing with one bear like that would wind up taking a conservation officer away from other duties for a day or more at one of our busiest times of year time when Minnesotans are recreating outdoors by the hundreds. We just don’t have the capacity for that. It wouldn’t be the best use of our time.”

The best way to resolve human-bear conflicts is to do everything possible to avoid them in the first place, said Cynthia Osmundson, DNR central region wildlife manager. In areas where bears have been reported, it’s best to eliminate or secure anything the bear may smell and consider as food: bird feeders, garbage, pet food and grills, for instance. Once a bear finds food at a particular location, it’s likely to return.

If a bear shows up in a backyard, it’s usually best to leave it alone until it leaves, Osmundson said. Standing around gawking is risky, and it may cause the bear to take refuge up a tree. If it is treed, remove people and dogs, and wait for it to leave after dark. Bears usually are as wary of humans as we are of them. While bear attacks on humans in Minnesota are very rare, they should always be treated as a wild animal that’s capable of inflicting serious harm.

“In a way, we’re lucky here in the metro region to have the woods and wetlands and open spaces that provide habitat for so many species of wildlife, even the occasional bear,” Osmundson said. “But living with wildlife means taking a few extra steps if we want to avoid conflicts. Nobody likes it when a bear has to be put down, least of all the DNR. Hopefully we can work together to make that a rare occurrence.”

For more information about living with bears and other wildlife, visit www.mndnr.gov, or contact a DNR area wildlife manager.

Photo of the backside of a Voyageur Bear 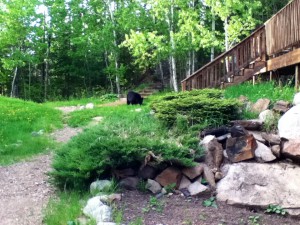 Voyageur as part of the bear buffet