I love to swim. When we’re on canoe camping trips in the Boundary Waters or Quetico Park I’ll sometimes swim three or four times a day. I am not talking about just taking a dip to cool off but actually going for a swim and exploring the lake. I also love having the Seagull River to swim in at Voyageur Canoe Outfitters. 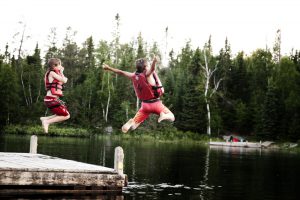 While river swimming sometimes sounds scary the Seagull River is anything but. There isn’t a ton of current in the river and unlike lakes the river rarely gets big waves. It’s ten feet deep off of the end of our dock so you don’t have to worry about weeds or a soft bottom. I used to begin each day with a quick run and then swim across the river and back. I haven’t done that for awhile but just the other day I did go for a quick dip fully clothed before returning to town. I just love the cool, refreshing water and the way it instantly calms me.

You’re never far from a lake on the Gunflint Trail and in Grand Marais, Minnesota, you’re right next to Lake Superior. The problem with Lake Superior is the water temperature is not conducive to a long swim, or a short one for that matter. In fact, the other day my niece and I went down to a beach on Lake Superior to go for a swim and the water was so cold our feet were freezing just walking on the wet rocks on shore. The lake had been stirred up and the water temperature had to be in the 40’s so there was no way we were going to even take a quick dip to cool off. 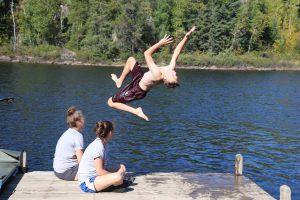 There have been times I’ve swam in the big lake and it is very refreshing. If it is super calm, sunny and hot it’s an amazing experience. The water is so crystal clear you can see so far down it’s eery. Some people choose to swim in the Grand Marais Harbor where the water is much warmer. It’s not as pristine as other areas of  the lake but the temperature sometimes reaches into the 60’s. Unfortunately there are times when no water contact is recommended in the harbor due to bacteria levels.

The no contact advisories don’t happen very often for the beaches on Lake Superior around Grand Marais, Minnesota. Thankfully we live in an area where there is very little pollution compared to the rest of the world or the state where,  “40% of the lakes and streams in Minnesota are not meeting standards set for safe swimming, fishing, or drinking”(MN Pollution Control Agency).

But back to swimming around Grand Marais, if you don’t want to swim in Lake Superior you have to do a little bit of driving. Mink Lake is probably about a 12 mile drive from town and it is the most popular place for folks to swim. It has a little beach and the water is quite warm due to the fact the lake is really shallow. It’s so warm there are weeds and towards the end of the season I’ve heard biting bugs sometimes become a problem. It isn’t my first choice place to go for a swim. 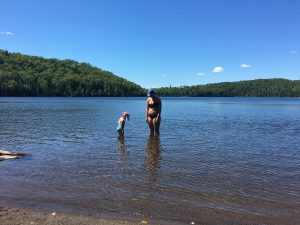 Devil’s Track Lake has a campground and a public boat access where people can swim. The campground doesn’t have a sandy bottom, in fact it’s super rocky but at least there aren’t weeds. It’s a 12-15 mile drive up to the public spots on Devil’s Track Lake too so I don’t go there very often.

I’ve swam in a number of lakes near Grand Marais including Pike Lake, Elbow Lake, Crescent and Kimball Lake to name a few. I haven’t found a place I love to swim as much as I do on the Seagull River where the eagles soar overhead, the loons swim alongside of me and the water is clean, cool and naturally refreshing.