Sue Prom Posted on October 29, 2016 Posted in News No Comments

High School Football for Josh and Mike is over for this season. It’s actually been somewhat over for Josh for a few weeks. He broke a bone in his thumb during a football game on the 7th of October and had surgery to repair it and put pins in on the 12th. He got a hard cast on the 19th and that will remain for a few more weeks. Josh has been watching practices and going to games but hasn’t been able to do anything. As quarterback it’s been tough for him to watch his team from the sidelines. I think it was equally as tough on Mike(one of his coaches).

In any case they lost their play-off game today and the season is over. Before we know it we’ll be driving to Silver Bay and Two Harbors for hockey practice but until then we’ll enjoy the brief intermission. 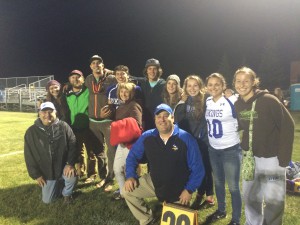 Voyageur Crew Members at a Home Game earlier in the season