It’s been awhile since I’ve written about earthworms but I haven’t forgotten about the destruction they can cause in a forest. Most people don’t realize the impact they can have but it’s super important, especially on the Gunflint Trail and in the Boundary Waters, that earthworms are disposed of properly. I’ve seen dead crawlers on a BWCA campsite and cringed hoping no live ones were dumped with it.  All crawlers are invasive to Minnesota Forests so be sure to dispose of them in the garbage and help protect the forests. 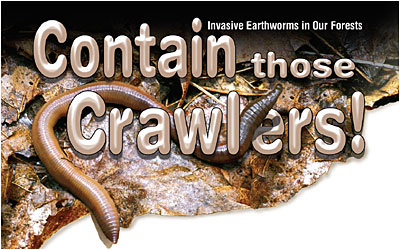 Native plant diversity in forests of northern North America is declining due to an invasion by earthworms introduced hundreds of years ago from Europe.

Earthworms are welcomed in gardens around the world; they aerate the soil and consume dead vegetation to form worm castings that enrich the soil and help plants grow. But it’s a different story in the forests of northern North America where a non-native species of earthworm from Europe, brought by early settlers, are creating conditions that decrease the diversity of native plants, according to a new study published September 3, 2016 in the journal Global Change Biology.

The impact of non-native earthworms has been previously documented on a site-by-site basis. The study led by Dylan Craven of the German Centre for Integrative Biodiversity Research takes a broader view. He said, in a statement:

The earthworm invasion has altered the biodiversity and possibly functioning of the forest ecosystems, because it affects the entire food web as well as water and nutrient cycles.

During the last ice age, northern United States and Canada were blanketed in an ice sheet. Glaciers severely eroded the land, destroying almost all native earthworms. When the glaciers began their retreat, about 12,000 years ago, the land was gradually recolonized by a forest ecosystem that did not include earthworms.

Settlers from Europe introduced earthworms back into to these northern areas. The earthworms have since been disrupting forest ecosystems.

Craven and his team looked for a generalized pattern of how forest plant species diversity changed with the presence of European earthworms. They used previously-published data from 14 sites in the Upper Midwest, the Mid-Atlantic, and an area between Indiana and Alberta.

They found that the diversity of understory forest plants decreased significantly, not just with increasing density of the introduced earthworms, but also with a larger variety of earthworm species occupying different soil layers. A forest understory with a high diversity of native plants, the result when there are no earthworms in the soil. Image courtesy of Paul Ojanen. Forest soil with an abundance of non-native earthworms can result in a bare understory. Image courtesy of Scott L Loss.

How are earthworms affecting forest ecosystems that evolved without them?

At the top soil layer, earthworms convert fallen leaves to humus. That’s a good thing if you’re growing a garden, but, in a natural forest, it causes a fast-tracking of the release of nutrients instead of allowing the leaf litter to break down more slowly, as it would without the earthworms.

Also, as they burrow through the ground, earthworms disrupt the mutually beneficial symbiotic relationship between fungi and plants. Some deep-burrowing worm species change the pH of upper soil layers by mixing in alkaline soil from deeper in the ground.

Burrows carved out by earthworms also speed up the drainage of rainwater, drying the soil faster. All of these changes adversely affect native plants that did not evolve in such conditions. For instance, the goblin fern is rarely found in areas with high earthworm density. Other native plants facing threats include largeflower bellwort, trillium and Solomon’s seal.

Earthworms also consume the seeds and seedlings of some plant species, influencing what grows in the forest understory.

In some locations, grasses, with their fine root systems that quickly absorb nutrients, dominate the forest floor. Non-native invasive plants that evolved in soils containing earthworms gain an even stronger foothold in these forests. Shireen Gonzaga is a freelance writer who enjoys writing about natural history. She is also a technical editor at an astronomical observatory where she works on documentation for astronomers. Shireen has many interests and hobbies related to the natural world. She lives in Cockeysville, Maryland.