Sue Prom Posted on May 7, 2017 Posted in News, wildfire No Comments

I’ve included a couple of posts about the Ham Lake Fire today.  I’m doing it because during the time the fire was happening I didn’t really have time to tell the whole story about what was going on until a few days into the fire.  It makes more sense to include this information now and I’m going to add some thoughts I didn’t express at the time. I’ll write my thoughts and any new information about the day in italics.

What happened on Sunday, May 6th?

The Ham Lake fire started out slowly on Saturday morning but picked up steam throughout the night.  I planned to attend the 11:00 fire briefing at the Gunflint Fire Hall on Gunflint Lake on Sunday.  I was going to bring my kids to play at Bakers while I was at the meeting, but on my way, I heard Mike on the radio mention the word EVACUATION.  I was driving and stopped to speak to a couple of homeowners who were on the side of the road, watching a fire creep in a swamp towards the Gunflint Trail.  I advised them to go back to their cabin and turned around other cars as they approached me.  I asked them to notify their neighbors and to start their phone trees to alert others of the evacuation. 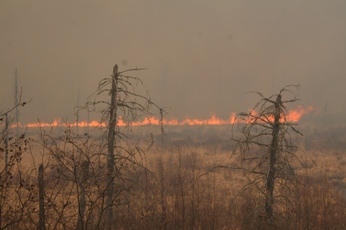 I proceeded to the fire hall where I quickly dropped the kids off and headed back to the end of the Trail.  Mike had me stop at the Seagull Guard Station where I was to pick up another member of the Gunflint Trail Volunteer Fire Department to help with the evacuation.  We were assigned Gull Lake Lane and Watter’s Point off of Sag Lake Trail.  We drove down every driveway to make sure there was no one home.

Other members of the Gunflint Trail Volunteer Fire Department were assigned to evacuate other residents at the end of the Gunflint Trail.  There were lots of cabins to check down long, curvy, dirt roads with only 8 GTVFD members, 1 border patrol, and a Deputy.  Everything was happening quickly and the fire was moving faster than anyone could keep track of.

Fire wasn’t anything new to most folks on the Gunflint Trail. Some people we encountered on our evacuation route weren’t convinced a wall of fire would soon be there. In my memory I remember a man who was a son-in-law of a man who was “dating” an owner of an outfitter. He was not at all concerned and I’m pretty sure the owner was on the same property, sitting on a porch of a cabin on Sag Lake Trail, enjoying a beer and “watching the smoke.”  I remember thinking, “WTF?”

Two other year round couples didn’t recognize the severity of the situation. They didn’t want to evacuate, didn’t believe the fire would make it to their place and perhaps they were a bit stubborn or foolhearted. I believe they both ended up evacuating but one couple lost their home because they didn’t get their sprinkler system going.

I knew we were in danger at Voyageur and Marilyn, Ian and Theresa were still there.  We hadn’t even thought about starting our sprinklers up and our reliable neighbor Michael Valentini was away for the weekend.  By this time anyone at the end of the Gunflint Trail who hadn’t evacuated immediately was trapped.  The stranded evacuees from our road were staged at the Sag Lake Public Landing.  Theresa and Ian were busy bringing boats around to the public landing in case we needed to evacuate to the North by water. 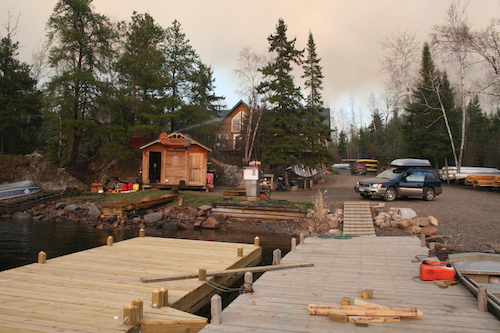 I remember taking this picture and thinking it might be the last time I see my lodge.

Things were going from bad to worse at the end of the Trail.  Our power was lost, our phone lines were down and we were right in the line of fire.  I needed to find Don so he could get our sprinkler system going, but I couldn’t reach him on the radio.  As I frantically searched the roads for him I ran into a neighbor, Tony Faras and asked him to please go and see if he could start our sprinkler system.

I continued down the Trail and found Don.  He was keeping an eye on the wall of flames that kept jumping the Gunflint Trail, preventing the safe evacuation of residents and the arrival of help.  Mutual Aid from other communities were called in, all volunteer fire departments with a minimum drive of one hour to get to the end of the Trail. 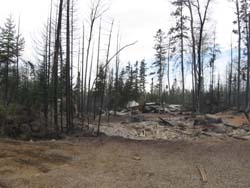 I went back to Voyageur to evacuate Marilyn, Ian and Theresa.  I told them to load some belongings, the dog, my photo albums and some of the children’s favorite things.  I wanted them out of danger and ready to go as soon as the opportunity to travel back down the Trail arose.

Word finally came that there was a window of opportunity to travel the Trail.  The Fire Trucks, law enforcement, Michael Valentini and Mike headed North and then the remaining evacuees headed south.  By the time the resources were allowed to head north, Seagull Lake was hot with flames.

The wind was strong and relentless.  Volunteers went to cabins that had sprinkler systems installed and attempted to start the pumps.  Since it was so early in the season, most homeowners hadn’t been up the Trail to their cabins so their sprinklers were not ready to run.  They were sitting as they had sat all winter; not primed and not ready to go.

The process of getting pumps started was not going well.  The lake level was about 2 feet lower than normal and some of the water intake hoses were not long enough to reach the water.  Some systems had parts that were broken and there wasn’t time to fix them.

We knew the fire was going to consume the end of the Trail.  There were a few people who were refusing to leave and we did our best to convince them to leave as soon as there was a break in the fire.  I did not want to leave the end of the Trail but when the next opportunity to evacuate arose, Mike assured them I would be joining the caravan.

I wasn’t with the rest of the group because my heart did not want to leave the end of the Trail.  My mind was telling me to go to the kids, but it was not an easy decision to make.  By the time I headed down the Trail flames were jumping every which way.  Tree limbs were falling from the sky, ashes were raining down, and fire consumed both sides of the Gunflint Trail. 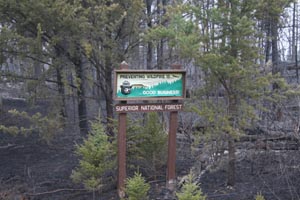 As I sat behind the wheel I wondered what the heck I was doing.  I feared I would come upon a downed tree in the road and be trapped without an escape route.  My car heated up from the intense fire that surrounded it and I feared my tires would melt to the pavement.

Just when I thought I couldn’t stand it any longer the smoke cleared and the flames subsided.  I had made it and I had made it alive.  I remember making it through the wall of frame and on the other side Dan Baumann, GTVFD Fire Chief at the time, was on the side of the road. I came to a stop by the Seagull Guard Station and I rolled my window down.  I don’t know if I said anything or not but I do remember him saying, “WOW, this is the first time I have ever seen Sue Prom look scared.”  I’ll admit I was scared, petrified actually and totally in shock. While I was relieved for my own safety I prayed for all of the others left at the end of the Gunflint Trail.  I didn’t know if they would make it out and I didn’t know if there would be anything left when I returned.

May 7, 2007 Thank God- And everyone else who has prayed, called, volunteered, or expressed well wishes for our safety on the Gunflint Trail.  We can’t say how grateful we are to the Bakers at Gunflint Pines who have given us food, shelter and a place to call home.  They have helped care for our children, our dog, and our cat while we have been busy with the Gunflint Trail Volunteer Fire Department.

I need to thank Mother Nature too.  She didn’t make the winds blow out of control, she kept clouds in front of the sun most of the day and she made the job of the firefighters much easier today.  Everyone involved in the fire fighting efforts has been incredible.  Sprinkler systems were kept running, spot fires were snuffed out with hoses and airplanes were kept busy all day long.  The life of a fire fighter is not a glamorous one.

We thank God and the firefighting personnel for watching over the Gunflint Trail.  So far there have been no lives lost nor any serious injuries.  There have been structures lost; cabins are gone, personal belongings have burned, and the landscape is forever changed.  These are losses but none are as devastating as a loss of life.