The official Gunflint Trail Canoe Races didn’t happen last year due to Covid 19 and they didn’t happen this year due to a lack of organizers and volunteers. Over the past 10-15 years the races had turned into a pretty big deal and they raised a large amount of money for the Gunflint Trail Volunteer Fire Department.  Two separate raffles were held each summer, one for a watercraft and one for a number of smaller items as well as a silent auction. People were needed to sell raffle tickets, pick up prizes from local businesses, make awards for canoe race winners, put up tents, sell t-shirts and make and serve food for the spectators. While this was a nice gathering for the community and a good fundraiser for the fire department it was a lot of work to organize. The races were kind of overshadowed by all of the focus on fundraising. 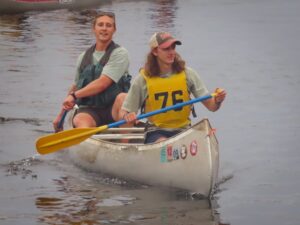 In the past resorts and outfitters held weekly canoe races at various locations on the Gunflint Trail. Employees would gather, compete and have a great time racing against each other. I don’t know the details of those events or when the races turned into a bigger deal but I do know the more formal races at Gunflint started sometime in the 70’s.

This year the employees of Gunflint Trail resorts and outfitters gathered for fun at Gunflint Lodge for the Clash of Canoes. Different name, same thing.  In fact if you look closely at the photo from 2017 and the photo from this year you’ll recognize a number of familiar faces.  Cassidy, Maddy, Sarah, Paige and Matt all participated in 2017!

While some things change over the years one thing has remained unchanged.  The Voyageur Canoe Outfitter Crew has predominantly taken home the First Place Trophy and this year was no exception.