Sue Prom Posted on September 13, 2020 Posted in News No Comments 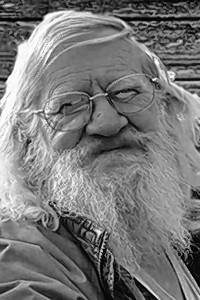 Those of you who have visited Voyageur in the summer may have noticed a guy in a golf cart. That was Goat. He was a fixture at Voyageur as he spent 2-4 weeks with us every summer. He arrived in his RV pulling a double decker trailer he built himself with his boat, “GPS Misguided” on it.  He worked on projects, fixed whatever was broken and went fishing on the side.  Goat, Ron Clemann passed away without having made his annual trip to Voyageur this year. This summer he opted to stay close to home to care for a family member and was planning to take a trip up this month for Matt and Cassidy’s wedding. To say we missed his annual summer visit is one thing, to say we will have to miss him forever is another.

There are countless deeds and projects Goat helped with at Voyageur. I could begin to list them but I know I would leave out tons of them. More importantly he was always there to lend a hand and attempt to fix whatever needed fixing. Every summer he’d bring a big bag of sweet corn from the fields of Iowa to share with our staff and some of his apple pie.

Our first summer at Voyageur, 1993, Goat told me before he paid his bill I had to have some apple pie with him. I had no clue apple pie was his concoction of ever clear, apple cider and apple juice but when one of only a handful of guests that first summer said I had to do or have something before getting paid I was certainly game. We sat down at the picnic table for apple pie and a connection was made to this quiet yet crazy soul.

Every summer since Ron has been bringing his hooch, sweet corn, Keystone beer and inebriating our staff in his RV while schooling them in cribbage. He touched the lives of so many of our guests and crew and anyone who met him had to adore him.

To say 2020 has been a tough year just isn’t enough. We’ve lost some amazing folks this year and Goat is at the top of the list.  I am brought a little bit of comfort by knowing when I walk, swim or paddle through the pearly gates Goat is going to be there waiting for me with a smile and a glass of apple pie.

Rest in peace Goat, we will miss you.

Ronald Dale “Goat or Billy Goat” Clemann, 68, passed away suddenly Monday, Sept. 7, 2020 at University of Iowa Hospitals and Clinics in Iowa City.
A Celebration of Life will be held on Sept. 25, 2020, from 5 to 8 p.m. at the Keystone Turner Hall. Interment will be held at the Keystone Cemetery.
Ron was born on May 8, 1952, the son of Wayne and Evelyn (Coleman) Clemann. He graduated from South Tama High School in 1970. On May 27, 1972, he was united in marriage to Debra Fellmet at St. John Lutheran Church in Keystone. Ron worked as an electrician at Amana Refrigeration until his retirement in 2010.
Ron was a volunteer fireman for Keystone Fire department for 21 years. He enjoyed attending the firemen’s convention, where he was part of a group that was like family called Swampville. He was a member of the Keystone Turners for more than 40 years and was passionate about his town and those who lived there. Ron enjoyed fishing and would go to the Boundary Waters every summer for more than 25 years.
He is survived by his wife, Deb; three children, Jamey Clemann and Ryan Clemann of Keystone and Hollie (Lucas) Garwood of Vinton; nine grandchildren, Nathan and Brayden Clemann, Cameron, Jack and Leah Clemann and Reed, Kennadie, Gabriel and Mallorie “aka Mabel” Garwood; a brother, Russ (Leann) Clemann of Toledo, Iowa; and a sister, Susan (David) Scott of Maquoketa, Iowa.
He was preceded in death by his parents.
Online condolences: www.phillipsfuneralhomes.com