You may have heard in the news yesterday the mystery of Devil’s Kettle has been solved. For years people, including scientist,  have wondered where the water that spills into the Devil’s Kettle from the Brule River goes. The river splits in two at the top of the falls and some of it flows down the obvious waterfall while the other part flows into a hole and disappears.  It was mysterious because people threw objects into the hole expecting them to come out at the bottom of the falls and they never did.

There was speculation… Was there an underground river? Where did the water go? So the big answer? It comes out beneath the falls somewhere. WHAT? How did they not know this before? That is the big mystery that remains in my mind.

No one had ever measured the amount of water entering and exiting the falls. Isn’t that mysterious that no scientist would have thought to test that before now? If someone can explain that mystery to me then I’ll really be impressed. 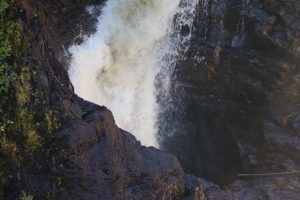 In late fall 2016, hydrologists Heather Emerson and Jon Libbey measured water flow above Devil’s Kettle at 123 cubic feet per second. Several hundred feet below the waterfall, the water was flowing at 121 cubic feet per second. “In the world of stream gauging, those two numbers are essentially the same and are within the tolerances of the equipment,” Green explains. “The readings show no loss of water below the kettle, so it confirms the water is resurging in the stream below it.”

I guess the tests that were done to see where the water went weren’t very scientific. Objects thrown in didn’t resurface just like they wouldn’t at the bottom of most waterfalls.  There’s alot of current at the bottom of a waterfall and sometimes things whirl around for days and weeks before they are spit back out to make their way down the river.  Sometimes objects already inside the whirlpool act like blades on a blender and basically chew up other smaller things.

I had heard about experiments using dyes in the water. But maybe no one really tried that because that’s how the scientists plan to determine exactly where the water enters back into the river.

“Green and Calvin Alexander, a colleague at the University of Minnesota, plan to conduct a dye trace to show where the water resurfaces. In the fall of 2017, during low-water flow, they will pour a vegetable-based dye into the pothole. This fluorescent, biodegradable dye is visible at 10 parts per billion, so the hydrologists will use only a few quarts.”

So there you have it. There never really was a mystery until now. It’s like wondering why a light bulb doesn’t work but not checking to see if the switch is turned on. Somebody just had to flip the switch. It would never have become a mystery if someone would have checked the obvious. Oh well, it’s still a beautiful waterfall.