Canadian Lynx on the Gunflint Trail

I think the Chinese got it wrong when they said 2014 was the year of the horse.  It’s definitely the year of the lynx on the Gunflint Trail.  There have been numerous sightings by many people in different locations.

Over the weekend our neighbors were up at their cabin on the Seagull River.  They had noticed some big cat tracks in the snow and later in the day saw a big cat crossing the frozen river. Our Voyageur Crew member Mark told us this story about a lynx up on Saganaga Lake.

A lynx was seen by several people all weekend long near Sagonto protecting a red fox kill.  Dick and sherry Powell got 20ft from it without it spooking or leaving the fox. Unsure if the lynx took it down or it died of natural causes.  Kind of sad to see the fox go, glad it wasn’t one of ours!  Ironically driving home Thursday night I saw one running down the middle of the trail by tucker lake road.  It was dark and snowy, didn’t get alot of time to see much of it but still made my day!!  I’ve heard several reports of lynx sightings this winter, hope it continues!

Some of you may have seen the remarkable photos our neighbor Michael Valentini took that I posted on a previous blog.  They were of a lynx attempting to capture a squirrel for a snack.  An amazing thing to watch yet alone capture on a camera.  Here’s his story…

I was heading to work on Gunflint Lake about 9:30 AM.  I had just passed
Round Lake Road (the road that takes you to Tuscarora Lodge) and I could see
this dark blob on the left hand shoulder of the road next to the wind row
that the snow plows had made.  As I got closer I realized that it was a lynx
but it didn’t move at all as I passed it.  I thought that was odd but kept
on going all the while wondering if it had been injured and that’s why it
didn’t move.  I made it all the way to the Crossriver pit when I convinced
myself that I should head back to investigate.  As I approached the lynx,
this time on my right hand side it looked at me but again wouldn’t move.  So
I drove past, turned around at Round Lake Road, took out my camera and drove
back to the lynx.

As I approached, it got up and climbed over the snow bank and then jumped up
the tree.  I could hear a lot of screeching noises and thought it was the
cat until I saw the squirrel scurrying about with the lynx in pursuit.  The
cat now was above the squirrel on the back side of the tree looking down.
Oddly enough the squirrel seemed persistent about getting up the tree and
not take chances on the ground.  The lynx leaped after the squirrel and
missed but they both ended up back in the same position.  The squirrel was
yelping at the lynx still trying to edge closer to get up the tree when the
cat tried again to catch it…but to no avail.  Next thing I knew, the
squirrel was gone (don’t know if it was up the tree or had made a retreat).
The lynx came down the tree and then headed off into the woods.

In hind sight I just wonder if the lynx had been so intent on catching the
squirrel and that’s why it wouldn’t move when I passed it by.
Anyway…that’s my story.

The next time you are up on the Gunflint Trail keep your eyes open and you might just catch a glimpse of a lynx yourself! 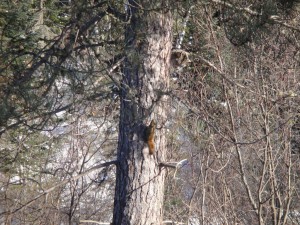 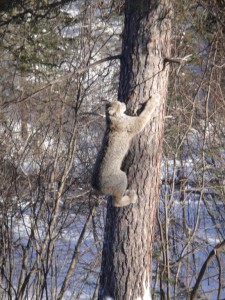 Canadian Lynx on the Gunflint