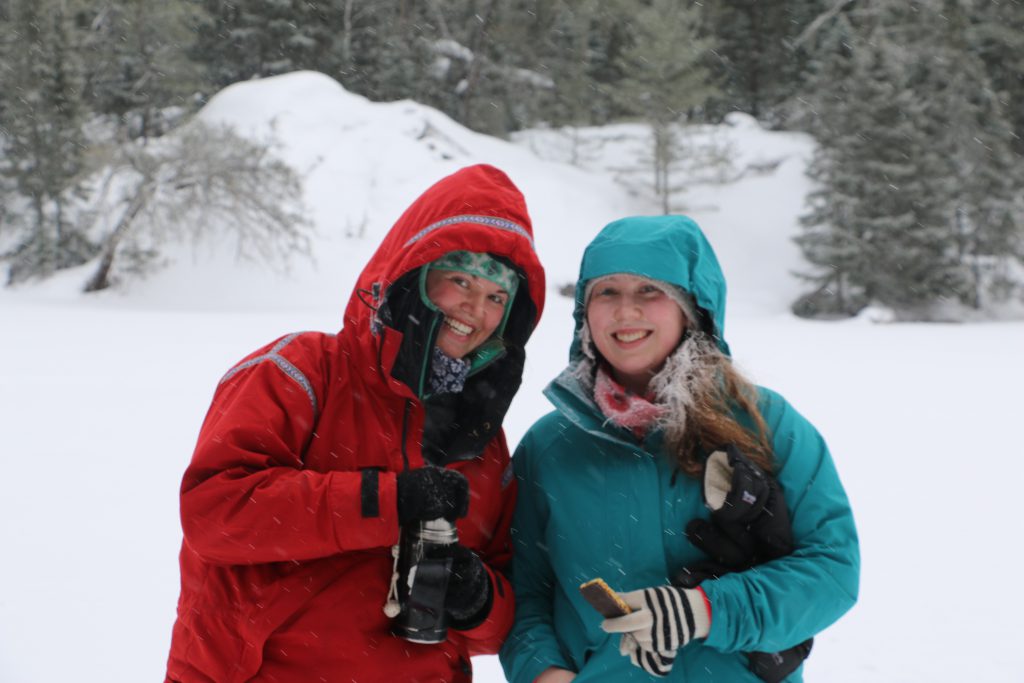 Just like you can’t pick your relatives you can’t choose what the weather will be like on any given day. The temperature wasn’t ideal on Saturday with a high of maybe 1 degree but that’s the day we wanted to go to the pictographs on the shore of Hegman Lake in the Boundary Waters Canoe Area.

We were visiting Tessa and Ryan in Ely, MN for the weekend and Tessa was game for taking Abby and I to the pictographs while Ryan took Mike and Josh spearing. Tessa and Ryan both worked with us at Voyageur Canoe Outfitters and are super fun to hang out with. The entry point to Hegman Lake is 15 miles from Ely off of the Echo Trail. The trek begins with an 80-rod portage into South Hegman Lake and there’s only one other 5-rod portage between South and North Hegman Lake.

We brought our snowshoes along but decided to use our cross-country skis since there was such a well beaten path. I never realized how easily accessible these BWCA pictographs were. It didn’t take too long to ski across the two relatively small yet strikingly beautiful lakes.

Before we knew it we were at the cliffs looking for the ancient paintings on the rock. Of all of the pictographs I’ve seen these are the best preserved. We took photos, drank a little hot tea, discussed the paintings and then retraced our steps back to the vehicle.

According to the USFS these pictographs in the BWCA are most likely 500-1000 years old. They say every picture is worth 1000 words and this one is no different. I usually just look at pictographs without giving them much thought but Tessa told me an interesting story about an interpretation of these particular ones.

From Astro Bob’s website– One recent interpretation of the enigmatic figures comes from Carl Gawboy, a member of the Bois Forte Reservation, who for many years taught American Indian studies at the College of St. Scholastica and University of Minnesota-Duluth. He contends the drawings represent Ojibwe Indian constellations — the human figure could be the Winter-maker, our Orion the Hunter, while the three canoes represent paddlers plying the Path of Souls or what we call the Milky Way. Kevin Callahan of the Department of Anthropology at the University of Minnesota agrees with Gawboy and suspects the dog and moose are star patterns below Orion, the dog being the equivalent of our Canis Major and the moose composed of stars in Eridanus the River and parts of other constellations. The paddlers in the leftmost canoe would represent the two bright stars in Gemini the Twins, the other pair might be Capella and its neighbor Beta Aurigae, while the third canoe has just one passenger —  the star Aldebaran in Taurus the Bull. The horizontal markings may have been used for counting or tracking the passage of time. The artist must have squatted on the upper ledge with his mixture of red ochre (mineral pigment derived from clay) mixed with animal fat or sturgeon glue (derived from the fish’s spine) and dabbed it across the granite surface.

The winter sky (left) featuring Orion and the neighboring constellations of Eridanus the River, Taurus the Bull, Gemini the Twins and Canis Major the Greater Dog. At right is a view of the entire main pictograph panel and shows not only the three canoes but also a large red “X” that likely represents a star. Do you see similarities between the two?

We had an amazing adventure in the Boundary Waters checking out the pictographs. 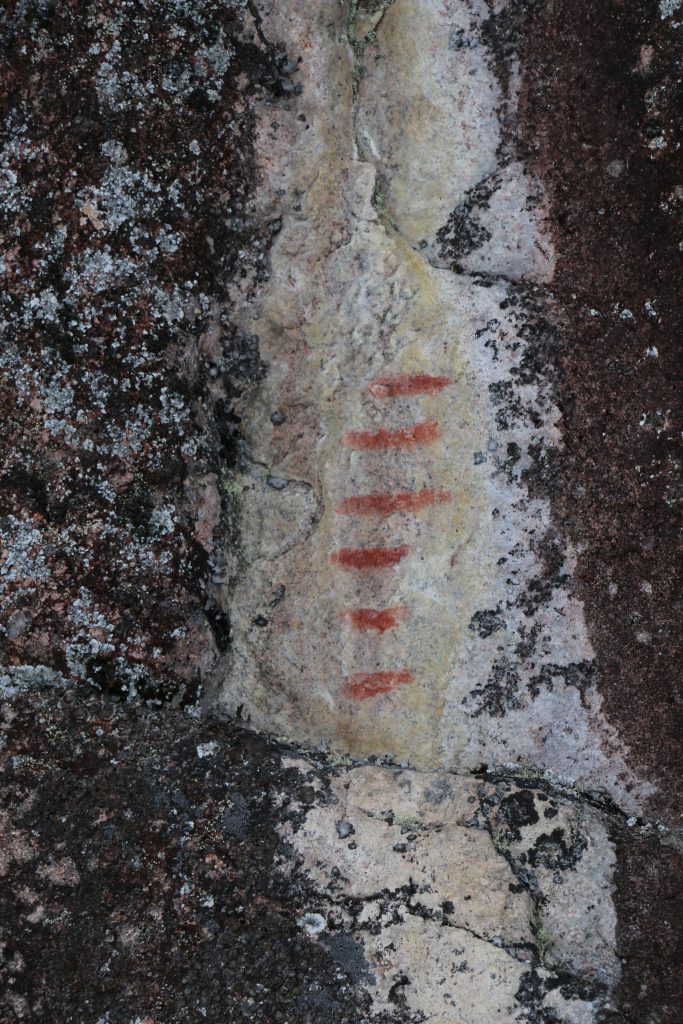