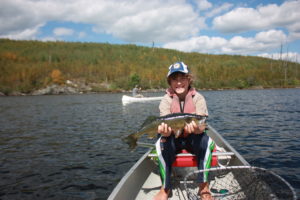 It’s difficult to believe this weekend is the Minnesota Fishing Opener but here it is. The excitement is in the air as folks make last minute preparations for the big day.  Boats on trailers, tackle boxes organized and bait in buckets all ready for the fishing opener. It’s also a popular weekend for folks to head north to open up their cabins after having been away all winter long.

Over the years we’ve owned and operated Voyageur Canoe Outfitters we’ve lost a few of those people and miss their smiling faces. I miss talking to them as they purchased their fishing license or topped off their gas tank prior to heading out on the lake. One fellow I especially miss is Grandpa Bay. He had a trailer in the little bay of the Seagull River and he used to drive tow boat for us on Saganaga Lake. He always had his fishing buddy Pug along and a story to tell.  When he was going fishing he would never just say he was going fishing, he liked to say he was going to irritate some trout or drown some worms.

No doubt there are Boundary Waters campers set up in their favorite wilderness lakes ready to do the same tomorrow. Amazingly it looks like it’s going to be a great weekend weather wise with no snow in the forecast and temperatures in the 60’s and 70’s all week long. Don’t let the air temperature fool you, the water temperature is freezing so wear your life vest and be safe! Here’s hoping you irritate those trout into attacking your lure and your drowned worms look like a tasty treat to a northern pike.