Besides the fun tricks you can do with boiling water when it’s -20 degrees outside there are a couple of other benefits. One big benefit the forest might see is a die off of the Emerald Ash Borer.

According to an article, “When temperatures get to about 20 below zero Fahrenheit, we see about 50% of the Emerald Ash Borer Larvae begin to die,” said Rob Venette, director of the Minnesota Invasive Terrestrial Plants and Pests Center with the University of Minnesota…Experts say at 30 below and colder, as much as 90% of the ash borer larva could be dying off.

Unfortunately the warming trends we’re experiencing have allowed invasive species to thrive.  Some researchers claim the warmer and shorter winters are partly responsible for the decline in the moose population. Winter ticks have been especially bad in recent years whereas years back the tick population appeared to be cyclic. 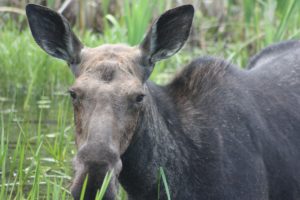 Moose on the Gunflint Trail

A study in an article about tick infestation on moose found this.  “In the study, published in the Canadian Journal of Zoology, researchers outline the screening of 179 radio-marked moose calves (age nine to 10 months) for physical condition and parasites in the month of January over three consecutive years from 2014 to 2016. They tracked new calves for four months each winter and found that a total of 125 calves died over the three-year period. A high infestation of winter ticks was found on each calf (an average of 47,371 per moose) causing emaciation and severe metabolic imbalance from blood loss, which was the primary cause of death.”

Another benefit of the severely cold temperatures is the amount of ice on lakes. Ice cover can prevent evaporation and thick ice that slows the ice melt can keep water temperatures lower longer.  This can benefit some fish species, reduce invasive species and slow down harmful algal blooms.
While we two-leggeds may complain about the nose hair freezing cold there are benefits that far outweigh having to turn the thermostat up another degree or add another log to the fire. Bring on the cold Mother Nature.
Tagged with: cold temperature, invasive species
Posted in environment